As another sweltering summer ends, another TokyoR Meetup! With global warming in full swing and it still being around 30 degrees at the end of September, this month’s meetup was held at DIP Corporation, an personnel/recruitment services company, in their headquarters in Roppongi, Tokyo. This month’s session was another special-themed session involving Shiny apps!

@hoxo_m of HOXO-M Inc. talked about asynchronous programming with Shiny. Starting off with an introduction into the history of single and multi-threading in both R and how the growing popularity of Shiny has lead to a demand for multithreadedness to cater to the multitude of users using a Shiny app at once!

The main package that facilitates this in both R and Shiny is the {future} package which allows one to be able to evaluate R expressions asynchronously (in parallel or concurrently on a cluster). By using {future} in a Shiny context you can shift resource-intensive tasks (ex. grabbing data from an API) activated by one user into another process and free up time for other users’ tasks and reduce their waiting time. 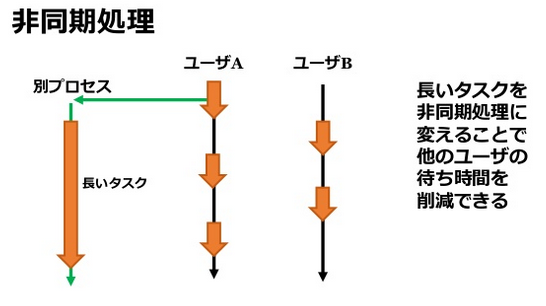 The plan() function allows you to choose from a variety of options for launching/attaching R processes. The choices are multisession, multicore, and multiprocess. You can read more about it here.

There’s not a whole lot you need to do to grab the results from another process as all the render_*() are able to take “promise” objects. As a reminder, a “promise” in this context is an object that takes a result from an asynchronous process that happens later/slightly later. A “promise” object takes the result from a {future} code result and it will wait until a result appears from another process finishes running the code.

Another important component of the asynchronous framework in R is the {promises} package. It’s this package that allows for the actual abstractions within your R code for asynchronous programming such as the “promise pipe”, %...>%! You insert whatever long task code you have into the future() function then use the “promise pipe” to pass it to the rest of the code. As a future/promise object is not a data frame you can’t pass filter() or other functions to it, so you have to pass the “promise pipe” first before other regular functions can be run. 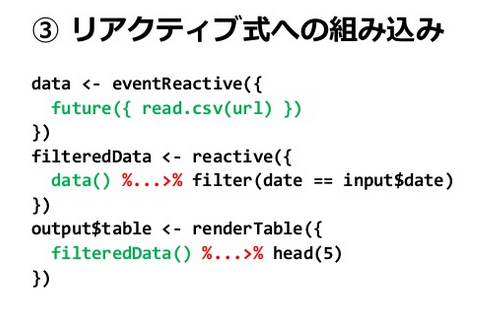 In a Shiny context, you can’t use reactives inside a future() function so one needs to assign a reactive as an object before the future() code and then pass that object into the function. 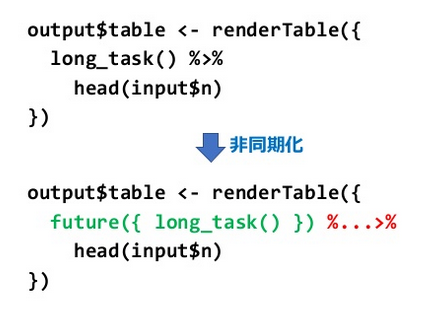 You also need to carefully think about WHERE (as in which process) the code is running. For example in the code below, the results are the same in both the top and bottom code. The code in black is done by the main process while the code in green is done by another process. 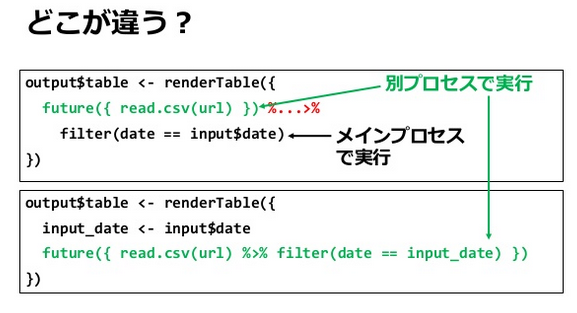 Although the above code works in both cases, for some functions such as plot() and print() can be run in another process and but their output can not be returned by the main process. The solution is to use the “promise pipe” to make sure that plot()/print() is being run by the main process instead. On the other hand you can still use promises within observe*() and eventReactive*()/reactive() code, you just have to remember to use the “promise pipes”. 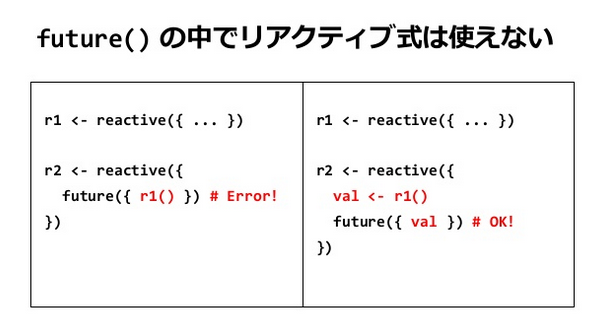 @Np_Ur is known in the Japan community for his love of {shiny}, he even wrote a book on it called “Building Web Applications in R with Shiny”. This presentation was largely a demonstration as @Np_Ur explained, from the ground up, a lot of the basic functions that can get you a working Shiny app in the space of 30 minutes! From creating a navigation bar via navbarPage() to creating different drop-down options for customizing a plot and talking about extra functionality from other packages such as {DT} and {shinycssloaders}, @Np_Ur took us through the code and showed us completed Shiny apps for each step of the way. 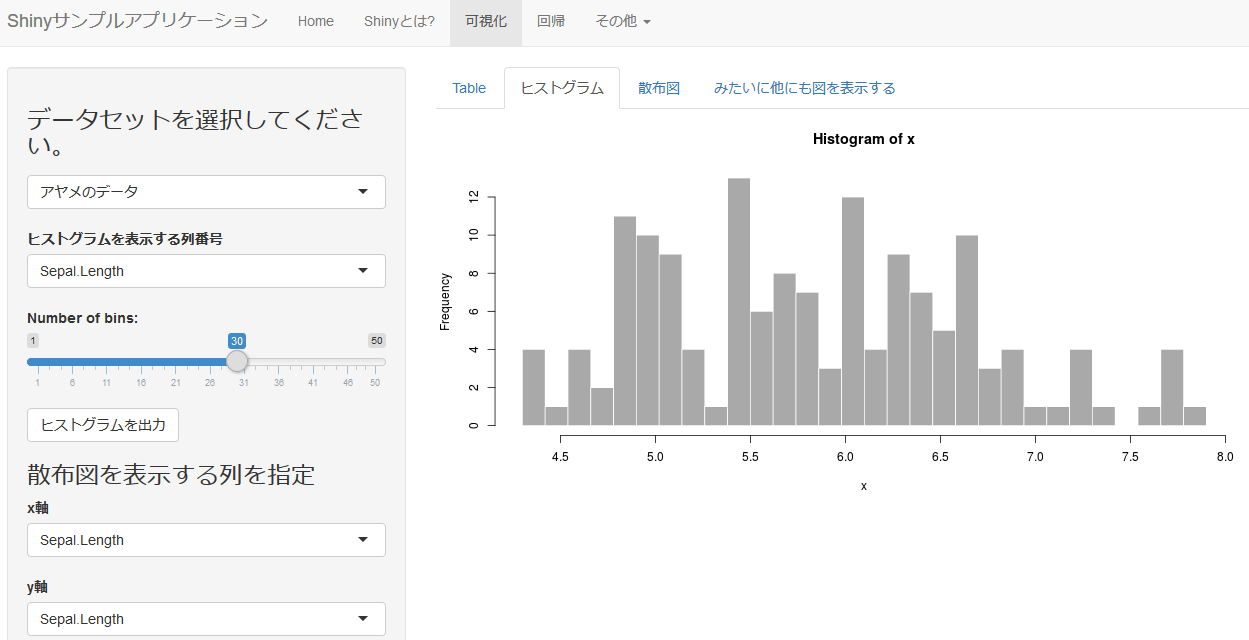 I recommend going through his slides (also hosted on Shiny) as well as checking out the code for each of the Shiny apps he made for all different functionalities he talked about by clicking on the link below!

@kashitan presented some tips (that you normally won’t see in books/articles) for using {leaflet} with Shiny for map applications! He took us through four different functions that he found very useful for making {leaflet} maps with Japan census data.

The first function: updateSelectInput() allows you to update a drop-down menu with new values after selecting a certain input. In @kashitan’s case using the Japan census Shiny app, he wanted to be able to update the choices of the city/district after choosing a different prefecture on the app. Using the updateSelectInput() function the list of choices from the drop down menu updates to the city/districts of the newly chosen prefecture! 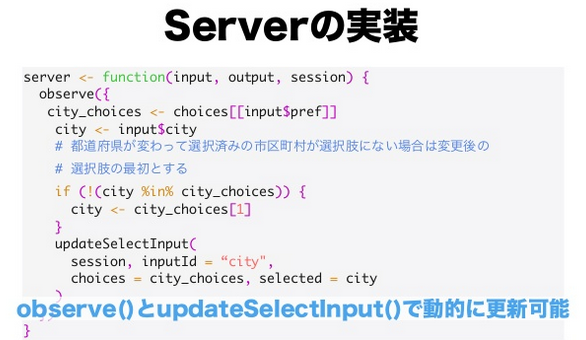 You can check out the documentation here.

The second function: leafletProxy() allows you to customize a {leaflet} map even after it has been rendered by Shiny. For @kashitan this was necessary as he didn’t want the map’s active zoom level and center coordinates to change even after choosing a new prefecture to look at. 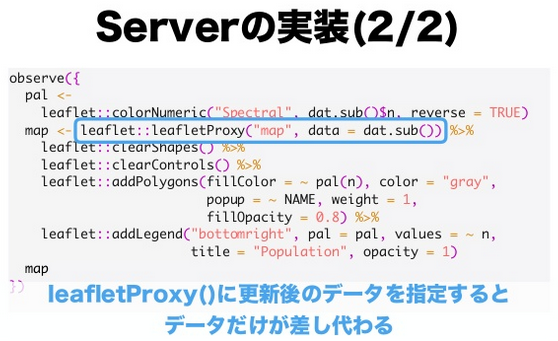 The third function: fitBounds() allows you to set the boundaries of the map. For @kashitan similar to the previous function shown, he wanted the bounds to the view, following a change in the city/district, to always be within a certain bounding box. 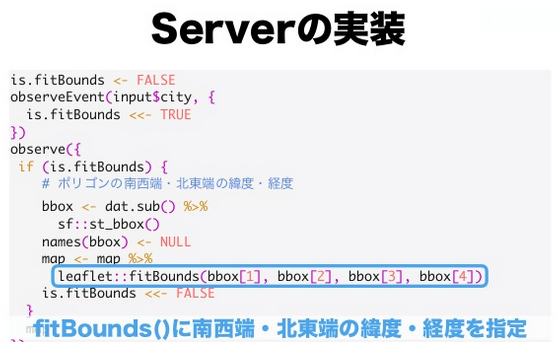 The last function: input${id}shape_click shows you information about the polygon shape of the map you just clicked. {leaflet}’s “click” event currently only shows you the coordinate and id values from this function. 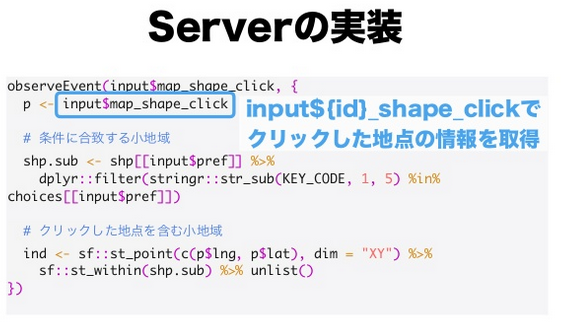 @okiyuki presented on the various R packages used for the software engineering that supports Shiny apps.

@okiyuki also talked about some of his personal struggles and pitfalls that he has come across when building Shiny apps at work. These include:

An extra section talked about various helpful packages for Shiny app aesthetics such as:

You might remember from a few months back, @igjit presented on “RAW image processing with R” (TokyoR #79). Continuing where he left off he decided to create a photo-editing UI using the power of {shiny}. Motivated by comments following the previous presentation, @igjit decided to base it on “Adobe Lightroom”, and call it the {shinyroom} package. You can take a look at it here. 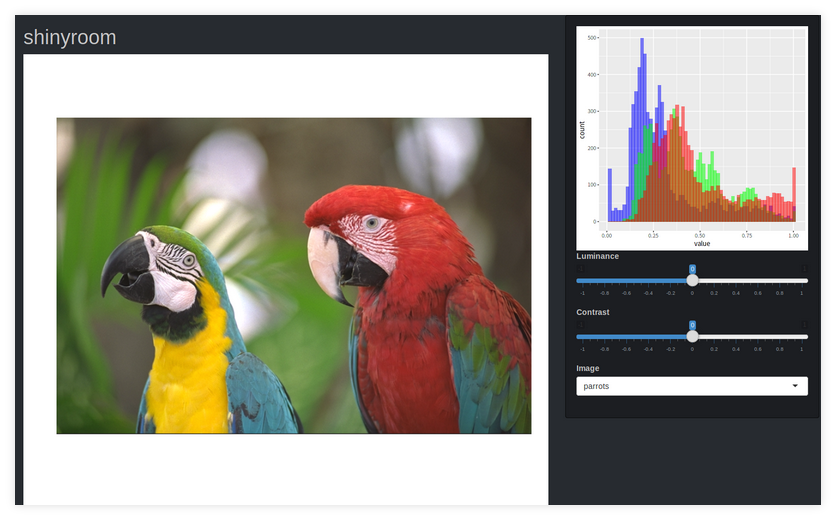 In terms of actually building the Shiny app he used the {imager} package for the actual photo editing functionality while {golem} was used as the package framework for the app. For appearances @igjit used the {shinythemes} package

During the course of building the app, @igjit came across a peculiar problem concerning the screen when the Shiny app was busy. By default, a particular panel becomes slightly opaque when the server is busy doing stuff in the background but this is annoying when you are working on editing images. To get around this problem, @igjit created another package called {shinyloadermessage} so that instead of the screen graying out a small message will appear instead.

@flaty13 talked about the recently made public {shinymeta} package and reproducibility with Shiny apps. This is a topic that has taken a while to develop due to the complexity of the issue, where the end goal was to find a way to document and describe the actions of users who interacted with very dynamic Shiny apps with many different features. With the {shinymeta} package you can now download R scripts highlight the steps you took in interacting with the app. 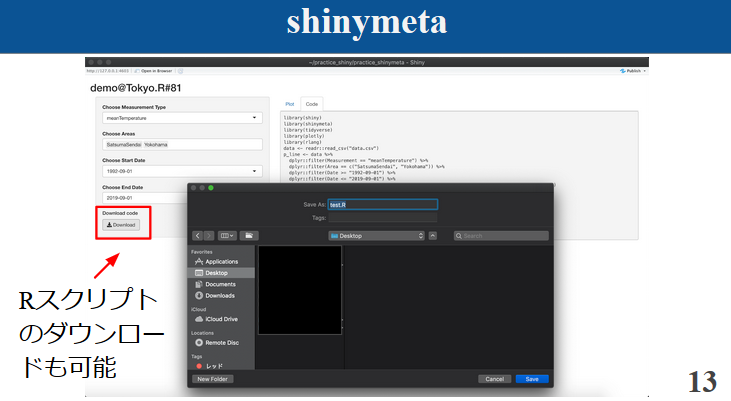 The next step that is currently in development is to output an .RMD report among a number of other features as the package is still in the experimental phase. See the resources below for more details, especially Joe Cheng’s keynote for all the stuff under-the-hood that’s making this exciting new development possible!

TokyoR happens almost monthly and it’s a great way to mingle with Japanese R users as it’s the largest regular meetup here in Japan. The next meetup will be on October 26 and I will also be one of the presenters!

Talks in English are also welcome so if you’re ever in Tokyo come join us!