As the sakura bloomed in Tokyo, another TokyoR User Meetup was held, this time at SONY City! On April 13th useRs from all over Tokyo (and some even from further afield) flocked to Osaki, Tokyo for a special session focused on beginner R users, BeginneRs. We’ve also had several special “themed” sessions in the past like TokyoR #69: Bayesian statistics in June last year as well as the TokyoR #70: Hadley Wickham + Joe Rickert Special! last July. Although mainly for BeginneRs, the LTs for this session were applications of R/case studies and may be of more interest to non-beginners if you want to skip ahead to that section.

Like my previous round up posts (for TokyoR #76 and JapanR Conference #9) I will be going over around half of all the talks. Hopefully, my efforts will help spread the vast knowledge of Japanese R users to the wider R community. Throughout I will also post helpful blog posts and links from other sources if you are interested in learning more about the topic of a certain talk. You can follow Tokyo.R by searching for the #TokyoR hashtag on Twitter.

These were the same set of beginner user focused talks that happens at the start of every TokyoR meetup:

Since this was a special BeginneR session, the main talks were all focused on even more introductory stuff on top of the usual beginner’s session in the previous section.

First up, @kilometer00 talked about doing data analysis with R. As a brief introduction he talked about what exactly IS data analysis, how we might go about forming a research problem and hypothesis, and how these steps are important in figuring out what kind of modeling we might attempt to do on the data at hand. The modeling techniques @kilometer00 covered were just the basics such as single/multiple linear regression and PCA. 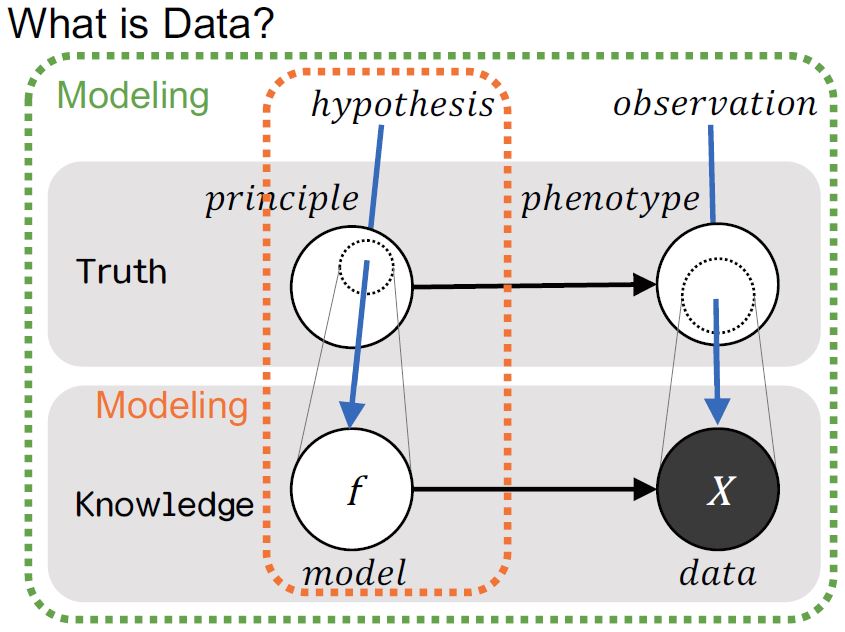 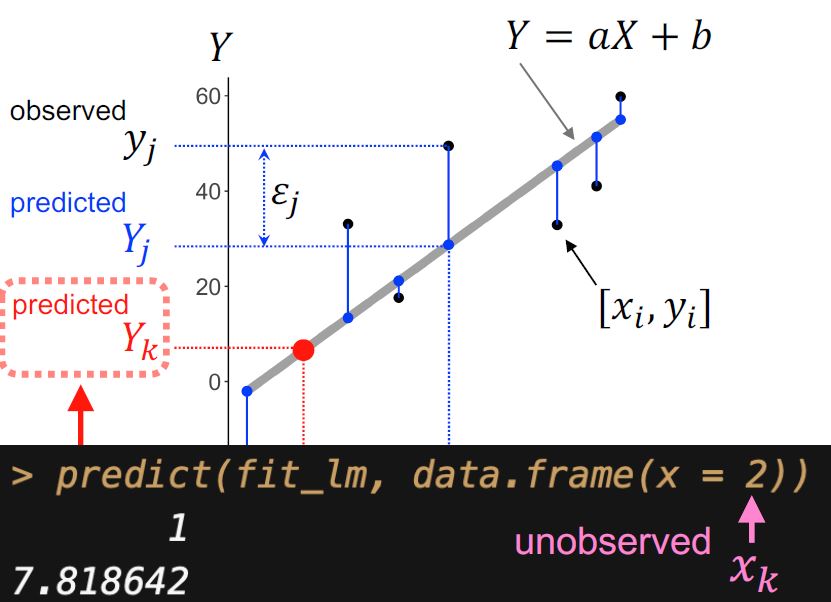 In the last part of the talk he covered nested data modelling. By using group_by() and nest() we can create a data frame that has one row per group (for example, a row for each species group in the iris data set) with has a new column called data which is itself a data frame. Now, instead of having to repeat the modelling code over and over again for each subset of rows (a model for each species in the iris data set), by using the purrr::map_*() family of functions you can apply your model to each of the groups that you specified earlier. 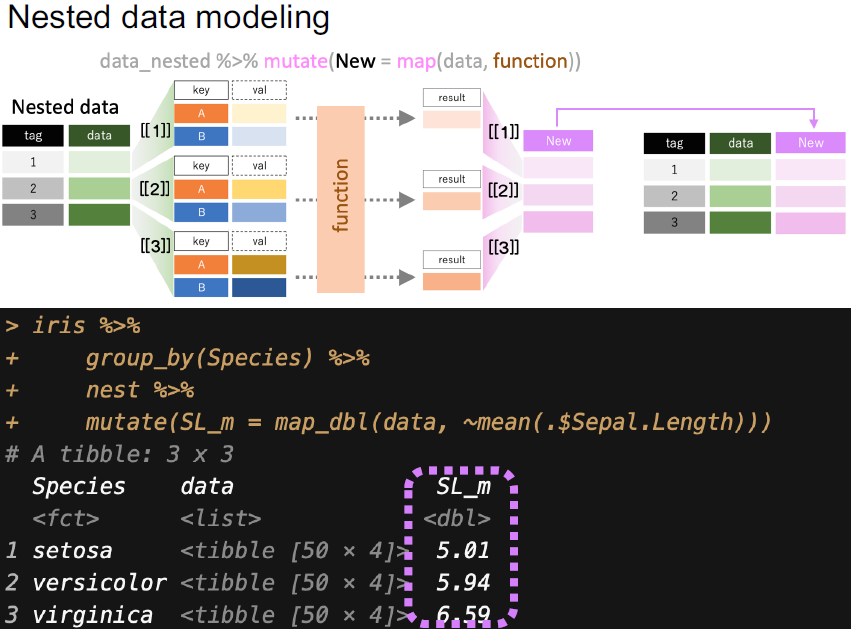 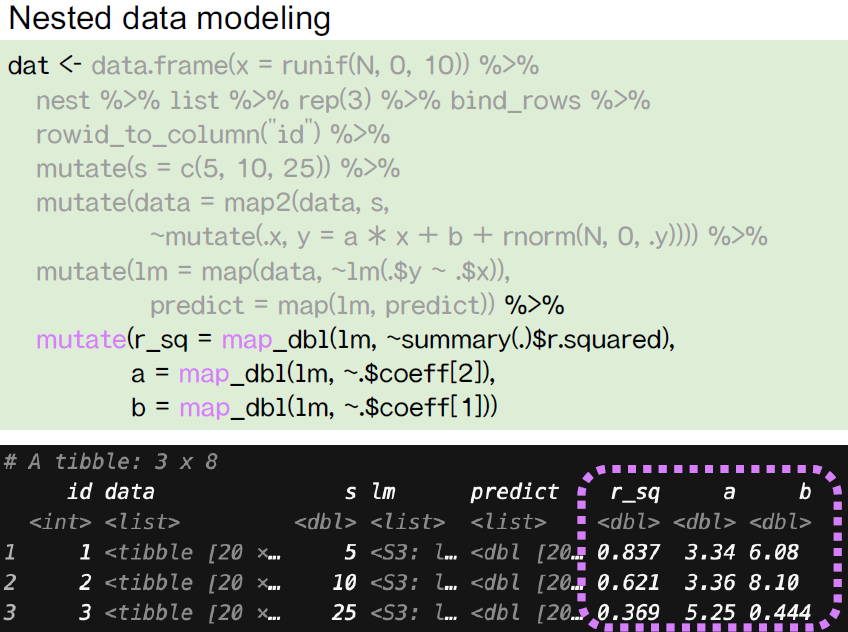 Filled with great explanatory graphics, plots, and code the slides are a good example of teaching the basics of modelling with R.

Some other resources about modelling with R:

Another TokyoR organizer, @aad34210, talked about using the R Studio IDE to maximize R’s strengths for programming and data analysis. After a brief spiel on the early days of using R solely from the console he talked about R Studio’s capabilities and the various options that can be customized to suit your R needs. From installing R Studio, configuring the four main panes, using R Projects, and using Global options, @aad34210 opened up his own R Studio window and pointed out the various menu options in thorough detail to help beginneRs navigate without getting overwhelmed. He rounded off the talk by showing the various Cheat sheets (included one for R Studio itself) that can be obtained from the Help tab. 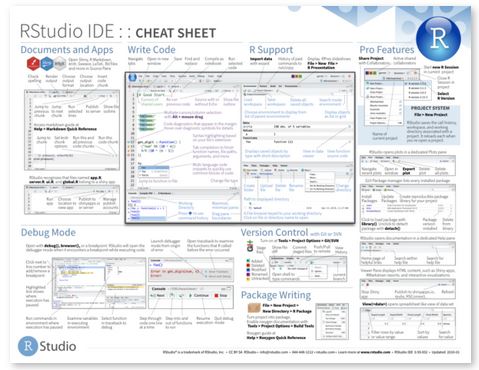 Some other resources one might consider to learn R Studio are:

@u_ribo gave a talk about the benefits of creating a reproducible and enclosed R environment using git and Docker. As an instructor who has ran many R workshops, @u_ribo has ran into the problem of his learners all having different OSs, versions of packages, and versions of R itself causing much headache for all involved. This is also the case when working in a team environment where analyses need to be shared and reproducibility of results is essential. 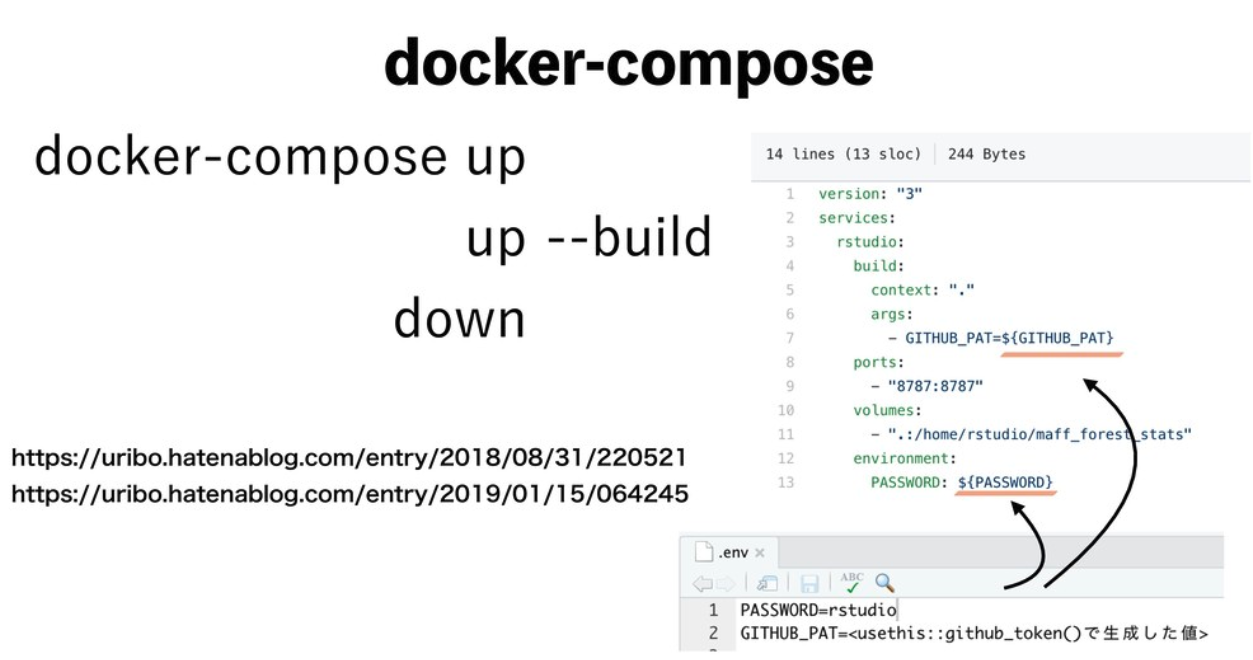 To reduce these problems he gave a live-demo using a variety of R tools such as the here package, the usethis package, and managing a project environment with R Studio Projects (.Rproj). To go further in depth he also talked about using git (made very easy with its seamless integration with R Studio) and the use of Docker. To run Docker you need an Docker “image” and a Docker “container”. An image is a file, called a Dockerfile, that has the information about and configures the Operating System for the environment. The container is the the actual running instance of the “image” that is defined by the Docker file. Going back to the issue of running a workshop, using Docker allows all of the participants to run R inside a specific container, an enclosed environment set up by the instructor, so that all the different dependencies and version differences won’t prevent you from running the code provided in the workshop.

Other good introductions to Docker and R:

@niszet talked about reproducible reporting with R Markdown. He was certainly the right person to give a talk on this topic as he is the author of the mini-books, “Create a Word document with R Markdown” and “Create a PowerPoint presentation with R Markdown”. To begin, he talked about cases where one writes a document, report, or any kind of output and how it might be a good idea to be able to create it again for “future me” or anybody else that might want to take a look. Normally, you would run into problems such as “where did my data go?”, “how did I pre-process my data?”, “” but you can mitigate these problems by using R Markdown reports. Whether it’s importing your raw data, the pre-processing/modelling/viz code, to the actual report and documentation write-up R Markdown renders the document in a completely clean environment each time so the results should be the same, every time! As noted in the beginning, you can create many different kinds of output such as Word document, PowerPoint presentation, html document, presentation slides, and more - even business cards (with the pagedown package)! Following an explanation of what you can do with R Markdown, @niszet talked about how exactly one would use it to its best capabilities. In a live-demo he took us through all the different components of an R Markdown document: 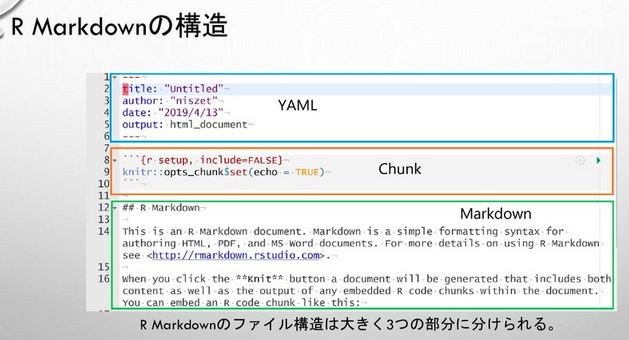 Some other intros to R Markdown:

GotaMorishita: Finding a New Place to Live with R

It’s only been 3 (three!) days since @GotaMorishita started learning R yet here he was giving a LT on finding a new place to live in Tokyo using R! Tired of living with his parents @GotaMorishita decided to live by himself and started thinking about ways to use R and machine learning to search for a place with an optimal price and location. After web-scraping a housing website and pre-processing the data he came across a problem: if he split the data into a training and test set for selecting the best predictive model then he would be throwing away a considerable amount of possible candidates for housing.

If @GotaMorishita took out 90% of the houses/apartments from the training data and kept those as candidates for the test data, it would’ve meant that the training data will have a markedly different distribution compared to the test data set and the model created from the training set wouldn’t be as accurate. This problem, called co-variate shifting, is when the training data and test data have different distributions but the conditional distribution of the output values given the input data is unchanged. Using standard methods of model selection such as cross-validation or AIC in this situation would lead to biasedness. However, this problem can be mitigated by weighting the loss function by importance (the ratio of training and test input densities). You can find a more detailed description in the research papers below. @GotaMorishita used xgboost to implement his models, one with importance weighting and another without, and used group-wise cross-validation to tune the hyperparameters. The results are shown below, comparing the overall test scores for all Tokyo districts (left) and just the Sangenjaya district (right), the RMSE was smaller when Importance Weighting was used. 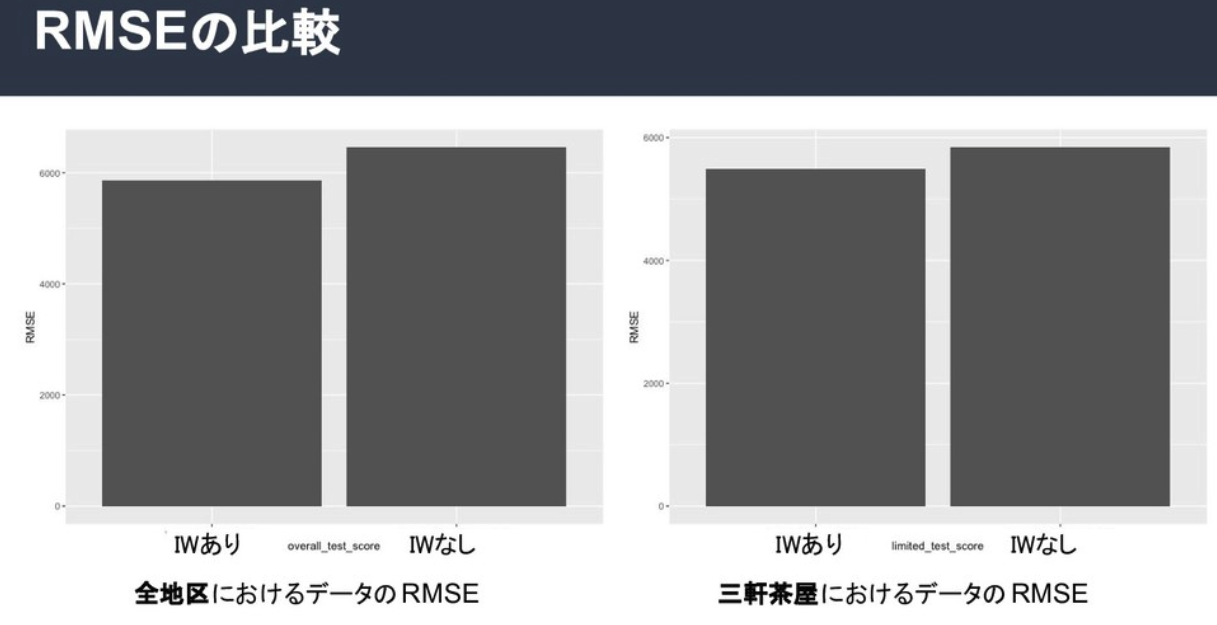 Some more info on co-variate shifting and importance weighting:

@sk_bono36 gave a presentation on using R for marketing purposes with the rtweet package. In marketing there is a concept called a “persona”, which is a blueprint of what a certain type of person in your target audience for your product/service is like. A basic persona template can consist of their name, job title, demographic details, values, and hobbies. You create these ideal customers through careful market research involving both social media analytics and interviewing/surveying the customers themselves. @sk_bono36 focused on creating a persona (with “自転車/Bicycle” as the keyword for this case study) by using rtweet then running Japanese text analysis with RMeCab. Visualizing the data with word clouds and network graphs of bi-grams he was able to find a lot of information on Twitter users who have “bicycle” on their profile or tweets and extract the common characteristics of this type of person. 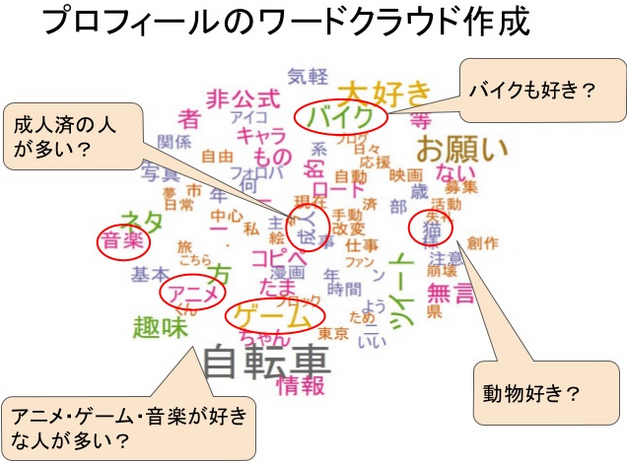 As a result of his analysis @sk_bono36 was able to create a persona of people who like bicycles: 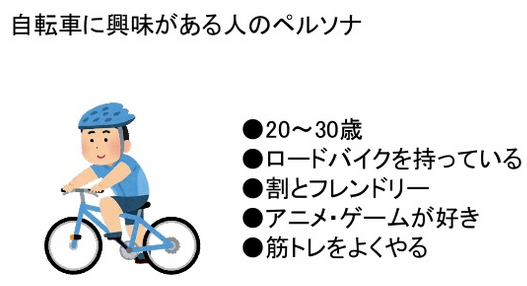 Some other intros to the rtweet package:

@igjit, who also presented at Japan.R back in December on building an R compiler with R, gave a talk about another recent project of his which is a package that acts as a type checking system for R. A problem that he finds in R is that errors relating to having the wrong data type in the arguments of R functions are only found when code is executed, not before. Frustrated by this @igjit created his own package called typrr that type checks your code! The underlying checker that typrr runs is Flycheck which is a syntax checking extension for Emacs. 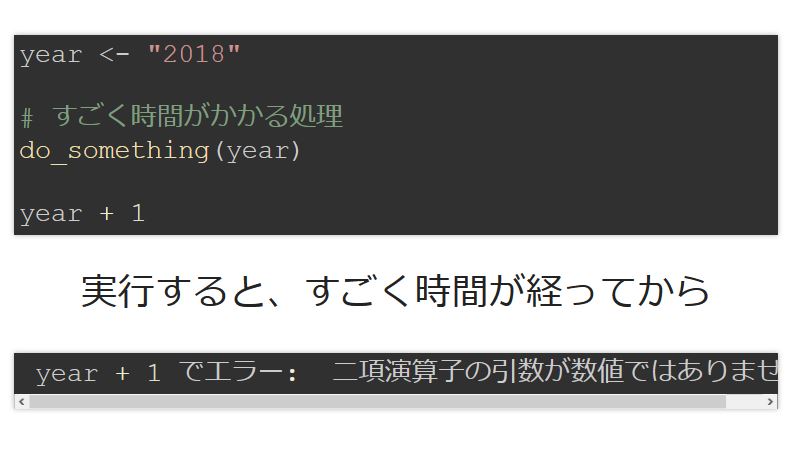 For now, the package only checks for the basic data types found in R, integer, double, logical, and character and it can only check functions with one argument only. He rounded off the talk by saying that he created this package just for fun and he advised all the beginneRs in the audience that people learn from doing rather than just reading so to truly get better it’s best to go out and experiment!

Following all of the talks, those who were staying for the after-party were served sushi and drinks! With a loud rendition of “kampai!” (cheers!) R users from all over Tokyo began to talk about their successes and struggles with R. A fun tradition at TokyoR is a Rock-Paper-Scissors tournament with the prize being free data science books (I still haven’t won any nor even gotten close to the last rounds)!

The prizes for this month were:

TokyoR happens almost monthly and it’s a great way to mingle with Japanese R users as it’s the largest regular meetup here in Japan. Talks in English are also welcome so if you’re ever in Tokyo come join us!