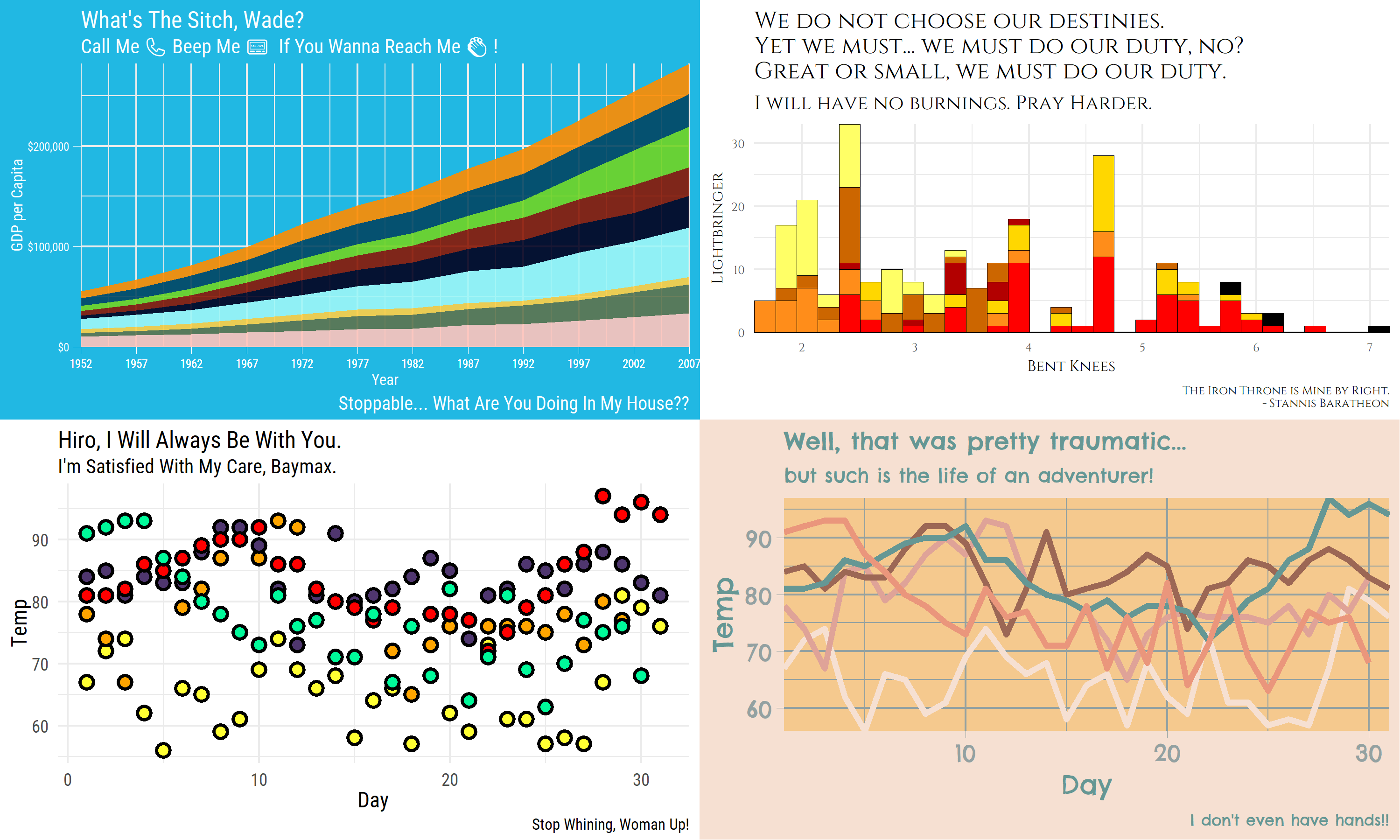 tvthemes v1.0.0 is finally on CRAN! After a long summer of procrastination, useR Conference, soccer viz, etc. and a couple of back-and-forth submissions with CRAN to fix some issues, as of September 3rd you can finally:

If this is your first time coming across {tvthemes} then you can read the intro blog post here. Although this new version has been out for a bit more than a month on GitHub, in the past week or so there has been more changes related to documentation, examples, and code. However, I’ll start off with the main additions of interest, new palettes and themes!

The One True King and Some Other Houses

Let’s start with the new additions to the Palettes of Ice & Fire. When I first created the palettes for the great houses of Westeros I immediately ran into the problem of there being so many houses that used similar color schemes. Namely, the combinations of red, black, and yellow/orange used in varying quantities by House Lannister, House Targaryen, House Martell, and House Baratheon of Dragonstone. Originally I just ran away from the problem by omitting House Martell and House Baratheon of Dragonstone but I came back to it mainly because I’m a huge Stannis fan. It’s definitely not perfect and there’s still some overlap but I tried to focus more on browns and oranges for Martell while Stannis got more brighter versions of the orange and red colors. 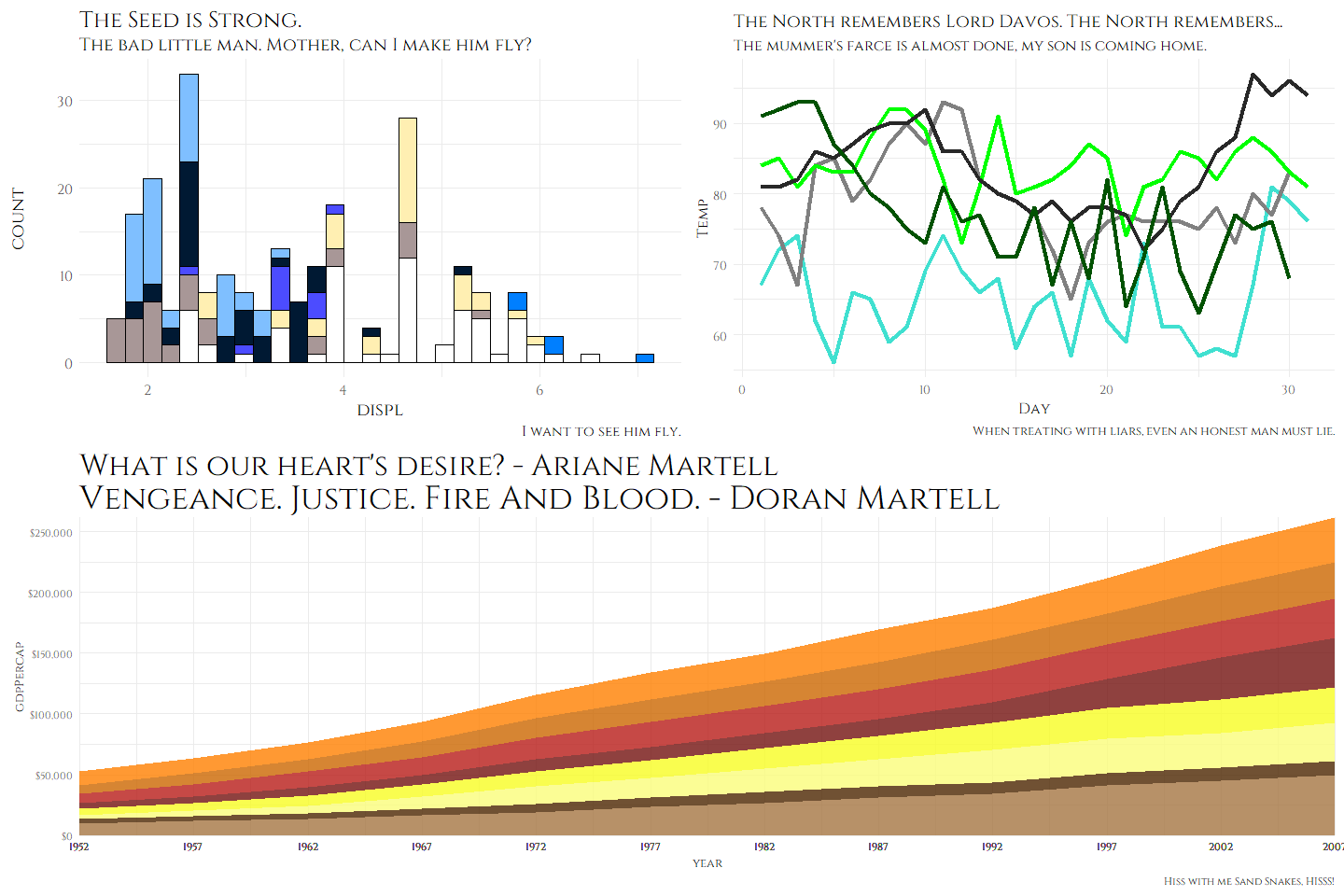 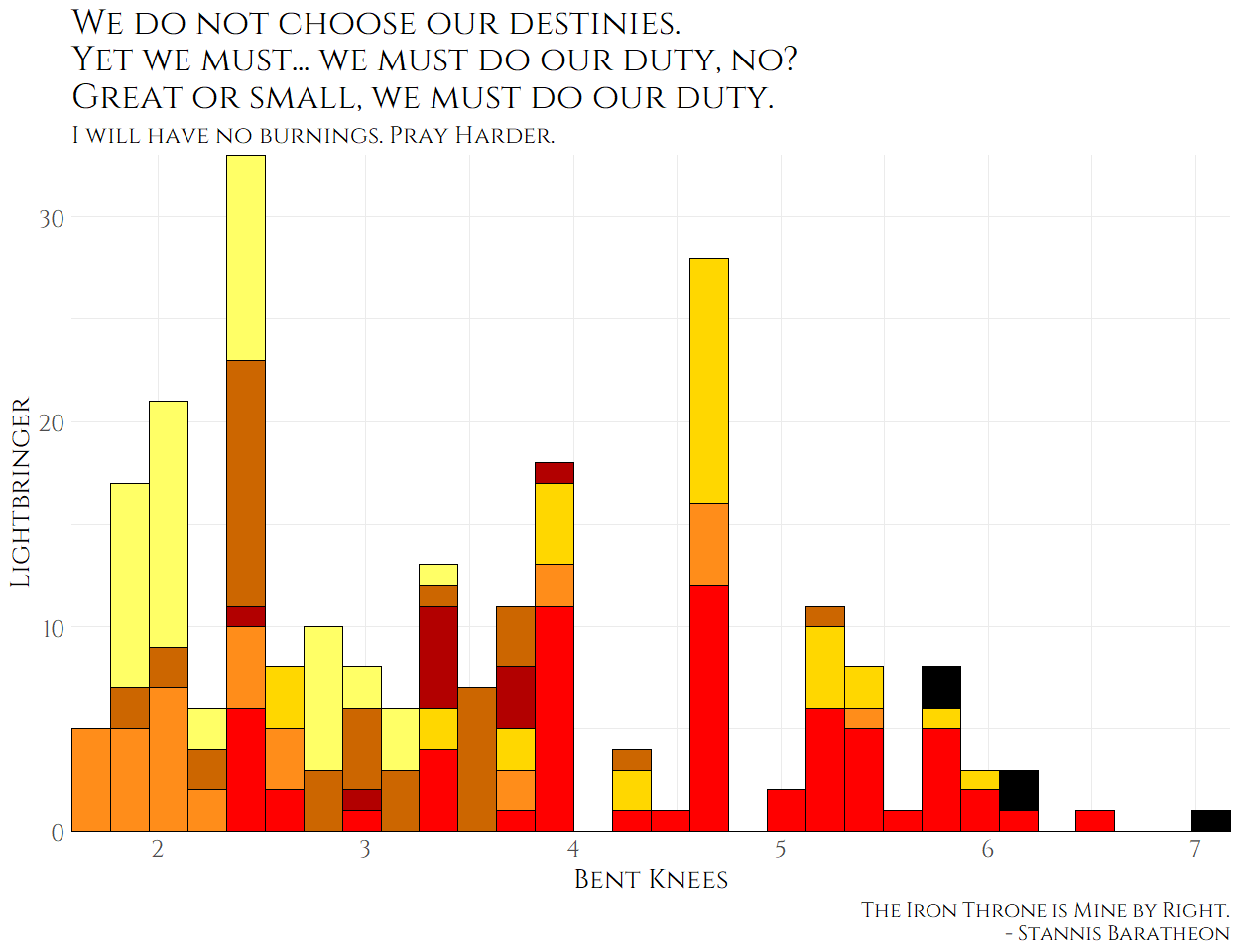 I’m pretty happy with the line-up for the Westerosi houses although I may add House Bolton and House Dayne later on. A RGB color-distance tool may help in having less problems with similar looking palettes in the future. (Stannis: fewer problems…)

This was a really fun one to work on due to the great color/style diversity seen across the characters. I’m especially a fan of Shego’s lime-green and Doctor Drakken’s midnight-blue/navy-ish colored outfits. Paired against Kim’s orange-red hair and khaki cargo pants color with Ron’s burgundy jersey and dark blue shirt it makes for a great palette of colors! 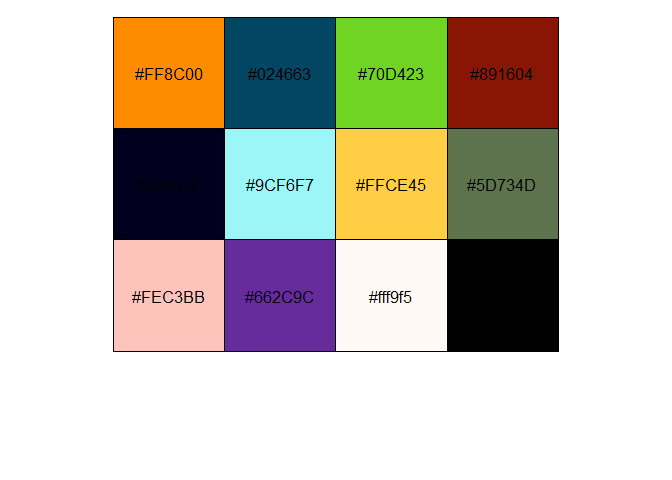 Together with the Spongebob theme it makes for a great looking graph! 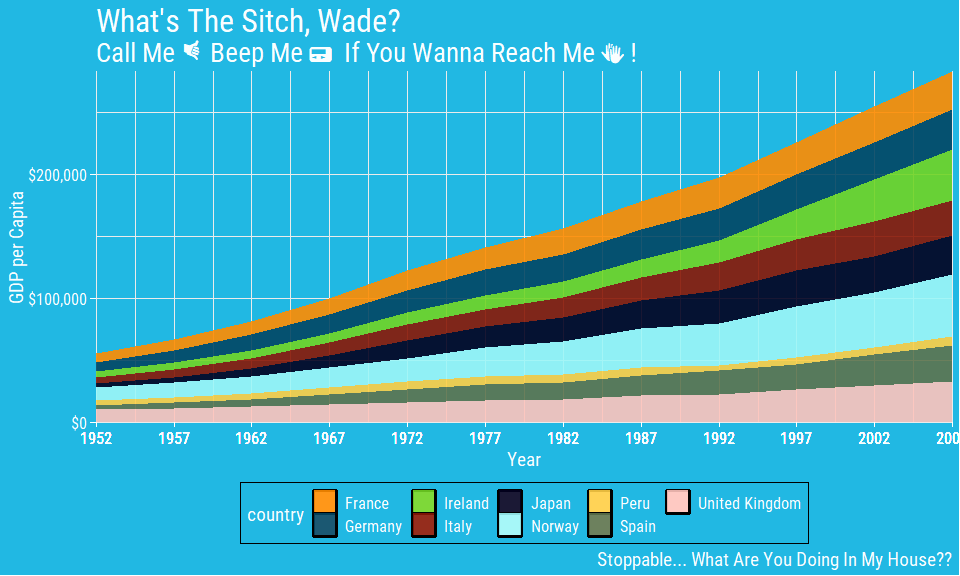 Hilda is actually a TV show that was recommended to me in the comments section of the Reddit post of my first tvthemes blog post. You might know the voice actress for the main character, Bella Ramsey, who played Lyanna Mormont in Game of Thrones. After Googling a few images, I saw how great the color scheme was and watched a few episodes. 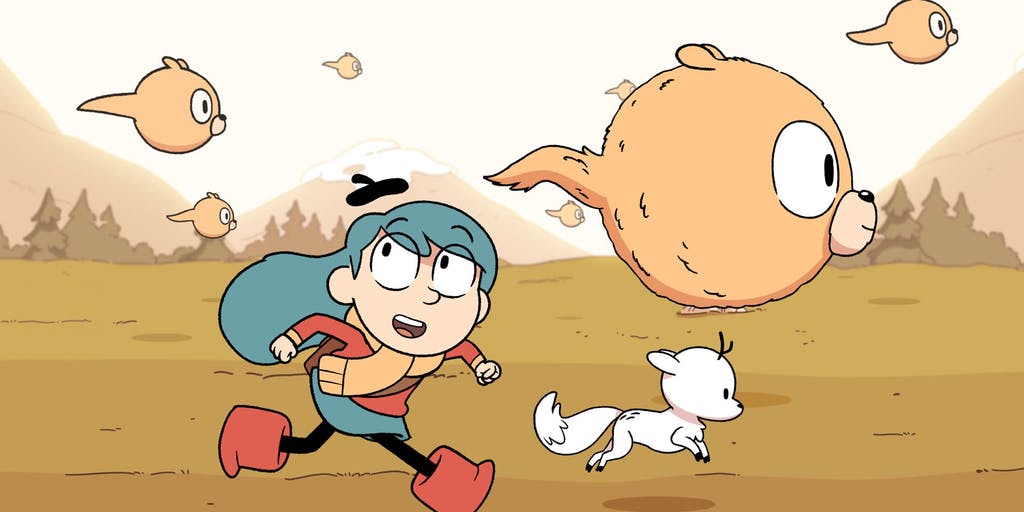 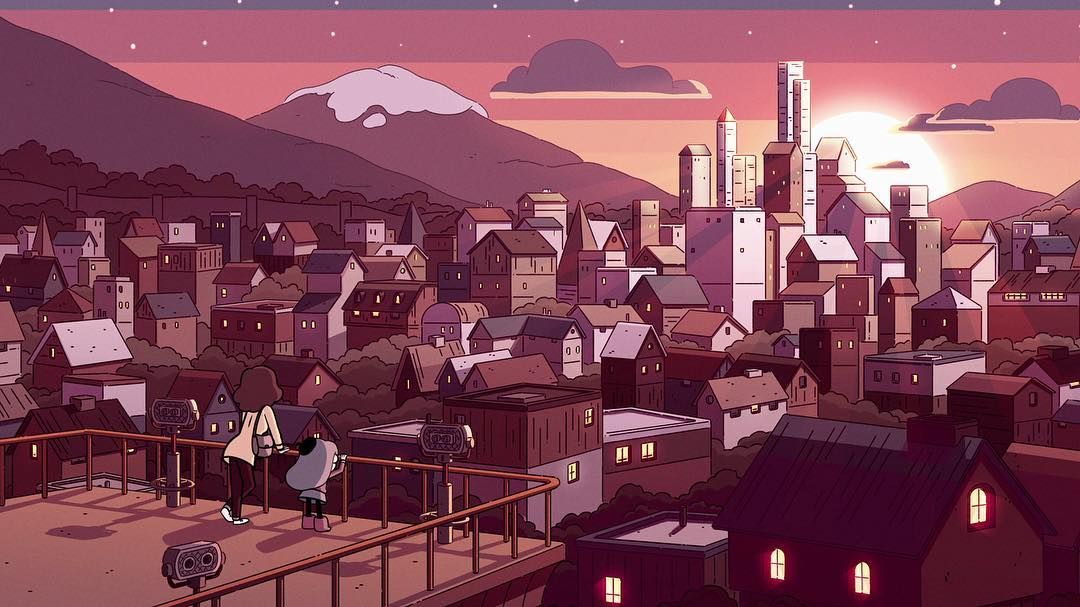 As above, you can see three distinct themes: Day, Dusk, and Night. They look fantastic and so I decided to include them for this release! With some help from previous attempts by Matt Shanks and ChevyRay I mixed and combined to create my own versions for each stage of the day. 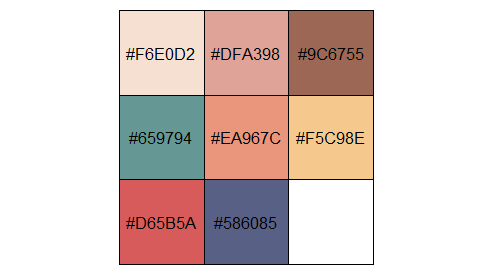 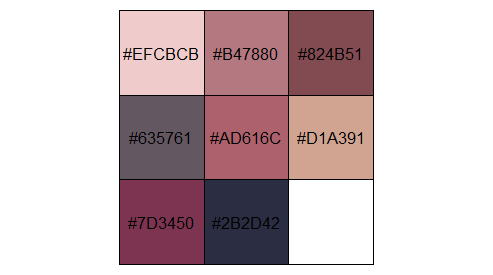 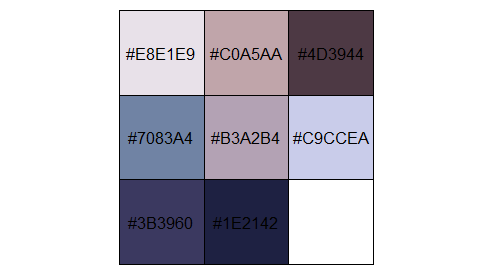 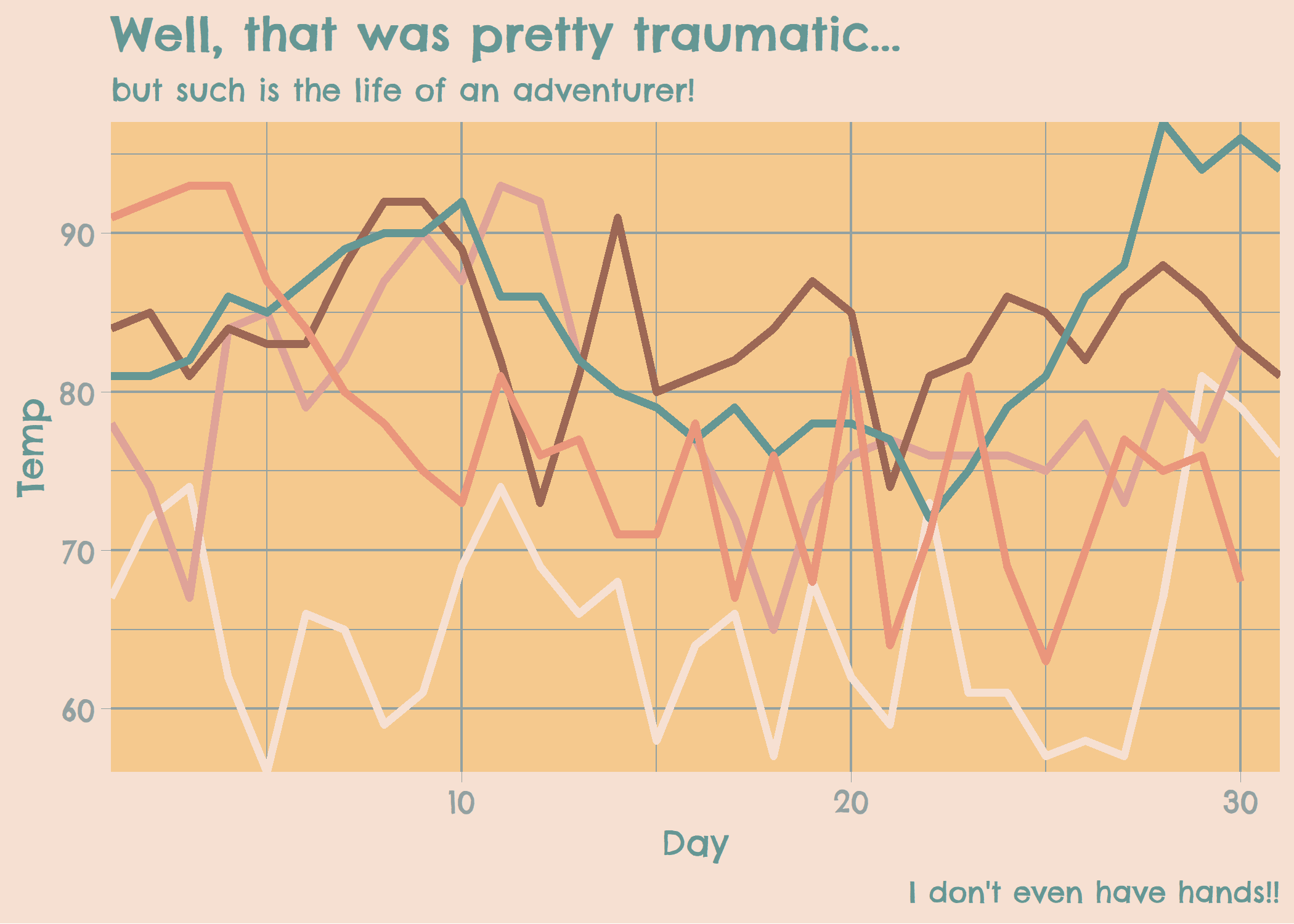 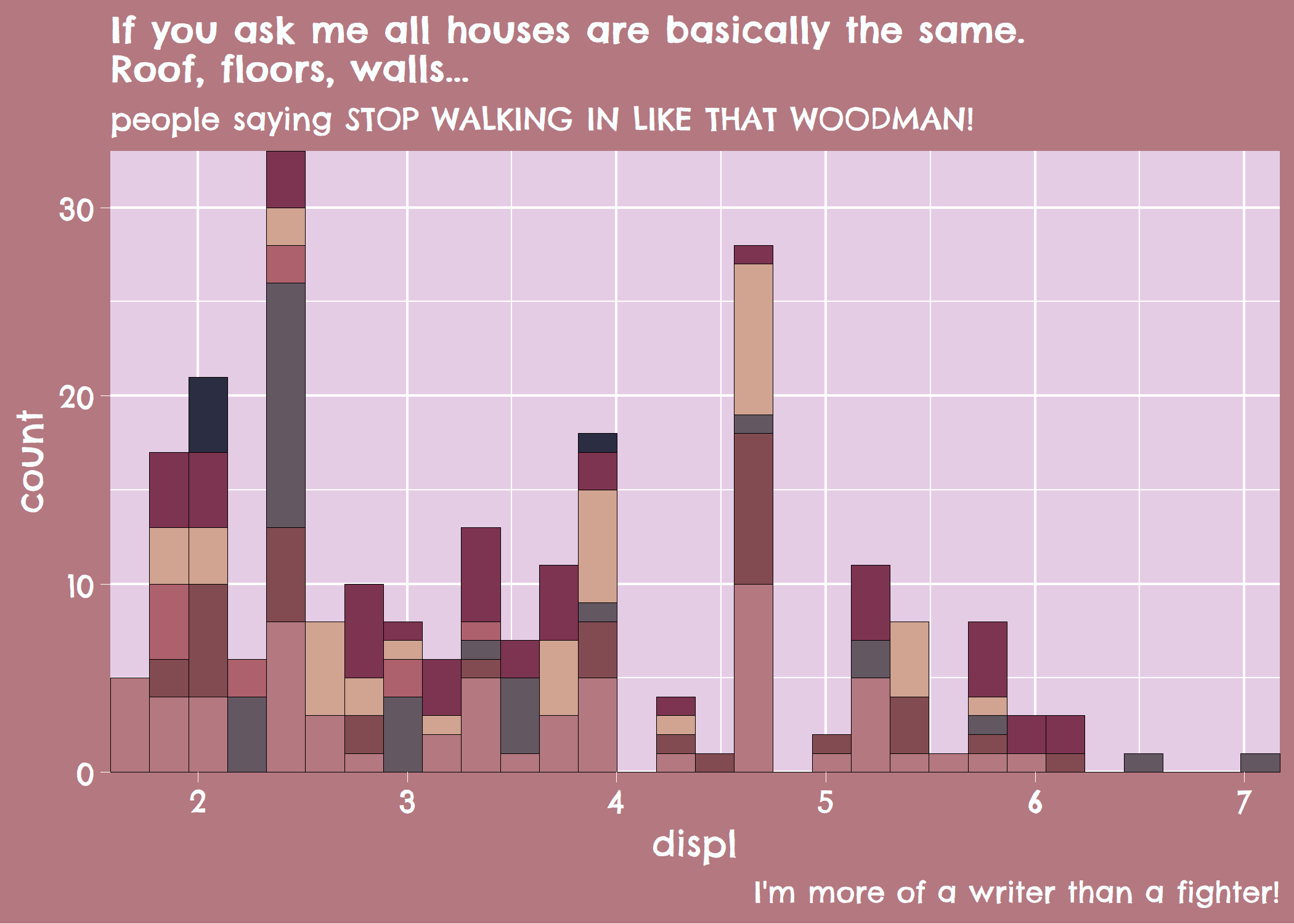 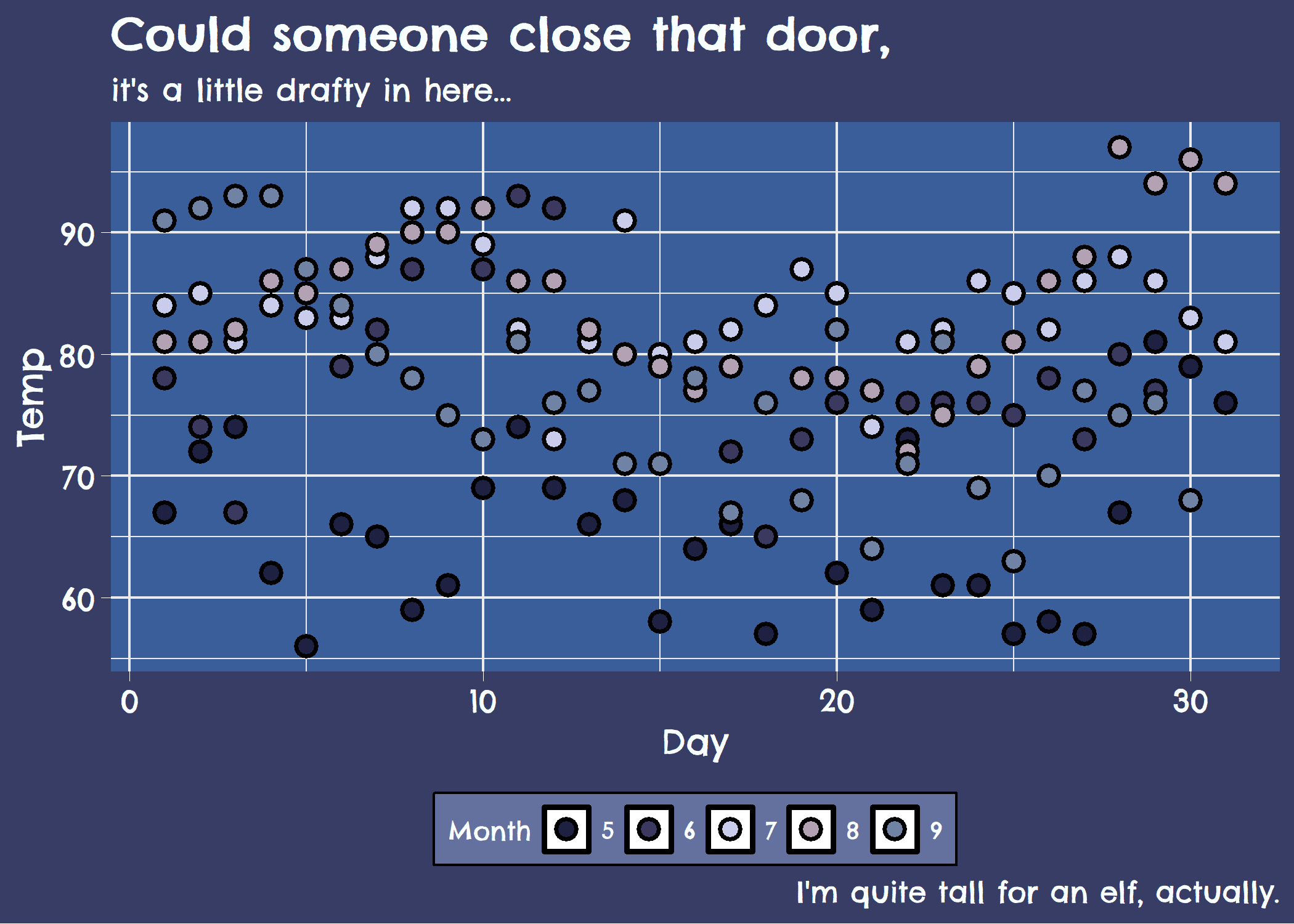 Most of ya’ll might have seen the movie a couple of years ago, but you might not know that they’ve also got an animated TV show too! It’s more drawn in anime form rather than the 3D form of the movie but it still retained its charm, humor, and of course the vivid color scheme for our heroes!

Attack on Titan took the USA (and the rest of the world) by storm when the first season of the anime came out. In light of the subsequent seasons coming out recently I decided to create a palette too. 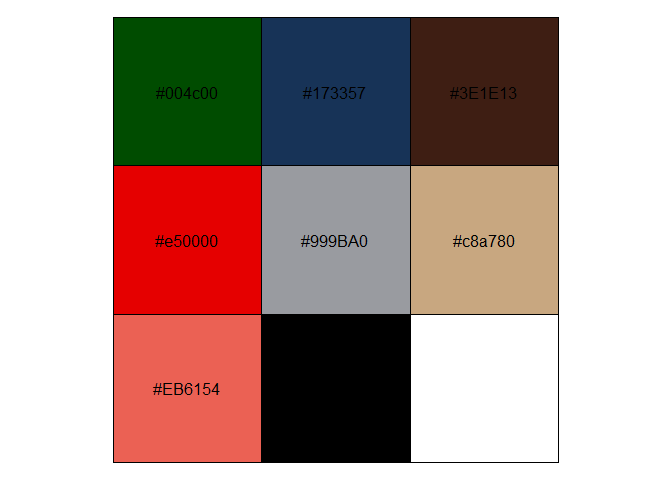 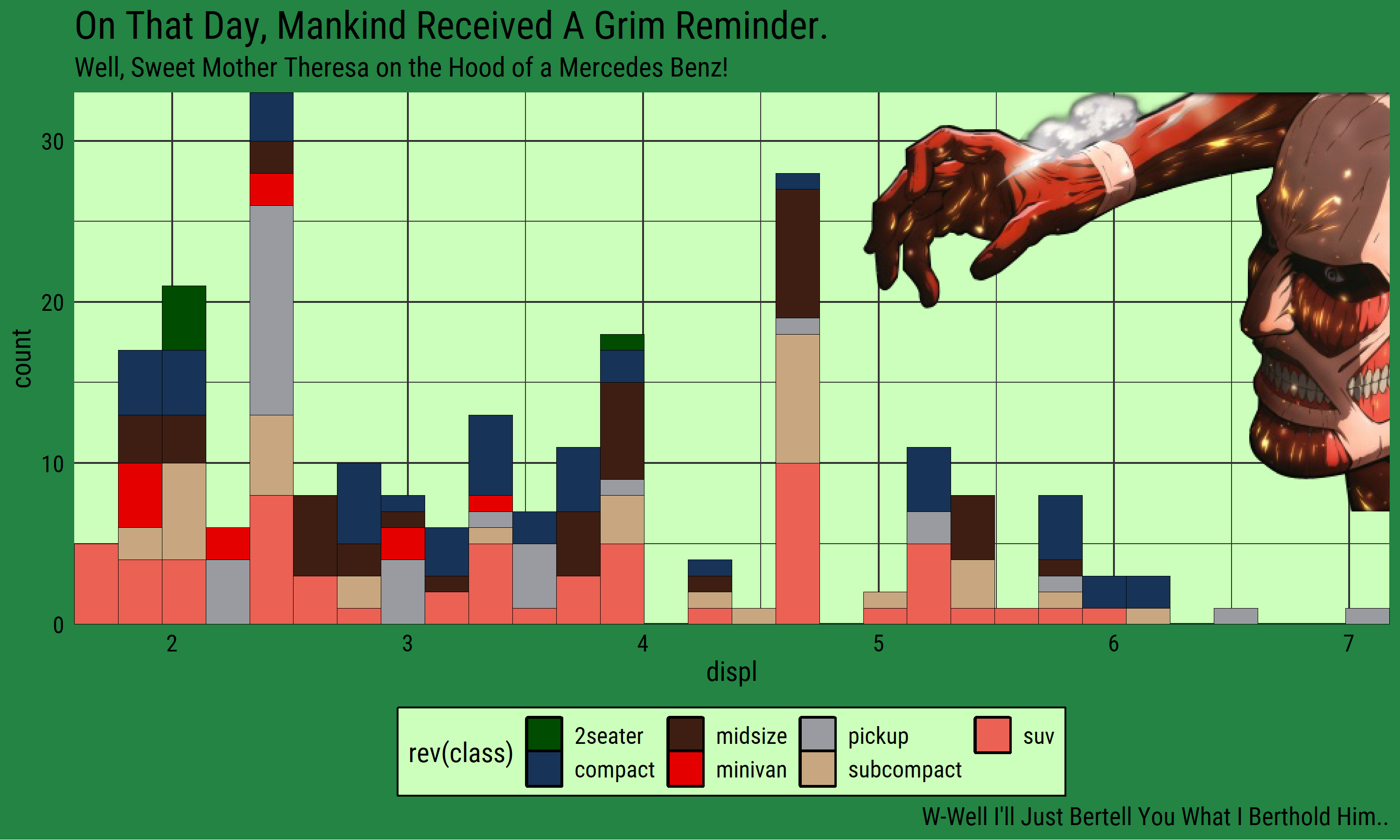 In addition to the new palettes and themes some of the code in tvthemes has changed significantly, but don’t worry most of it was under the hood with one major exception. In palettes for example, when you are calling the palette functions via scale_fill_*() or scale_color_*() you now have a lot more options:

For TV shows with multiple palettes they are now organized under a single “palette list” from which you pass the specific palette that you want. If you want to check out the colors for these specific palettes:

The specific palettes (fill/color) that changed are: 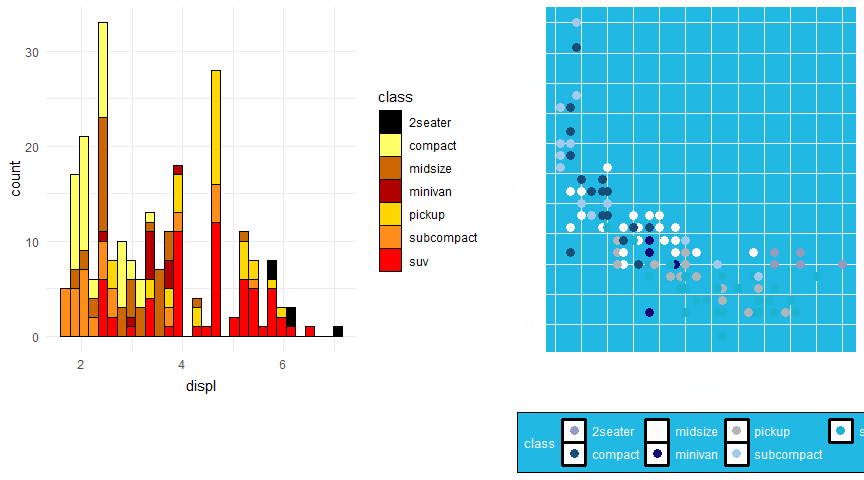 For themes the one change is a toggle option for axis ticks via ticks which you can set to either TRUE and the default FALSE. 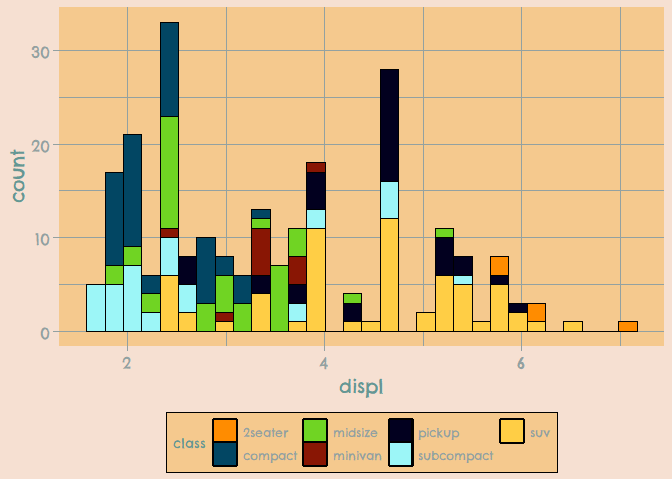 I mentioned in the last {tvthemes} blog post about Jim Hester’s video on preparing and going through with a CRAN release. I tried to emulate him using usethis::use_release() but unfortunately it didn’t work as I don’t think I had the gh::gh() credentials set up properly. Instead, I just followed along Jim’s video as he checked items off on the Github issue on his screen. 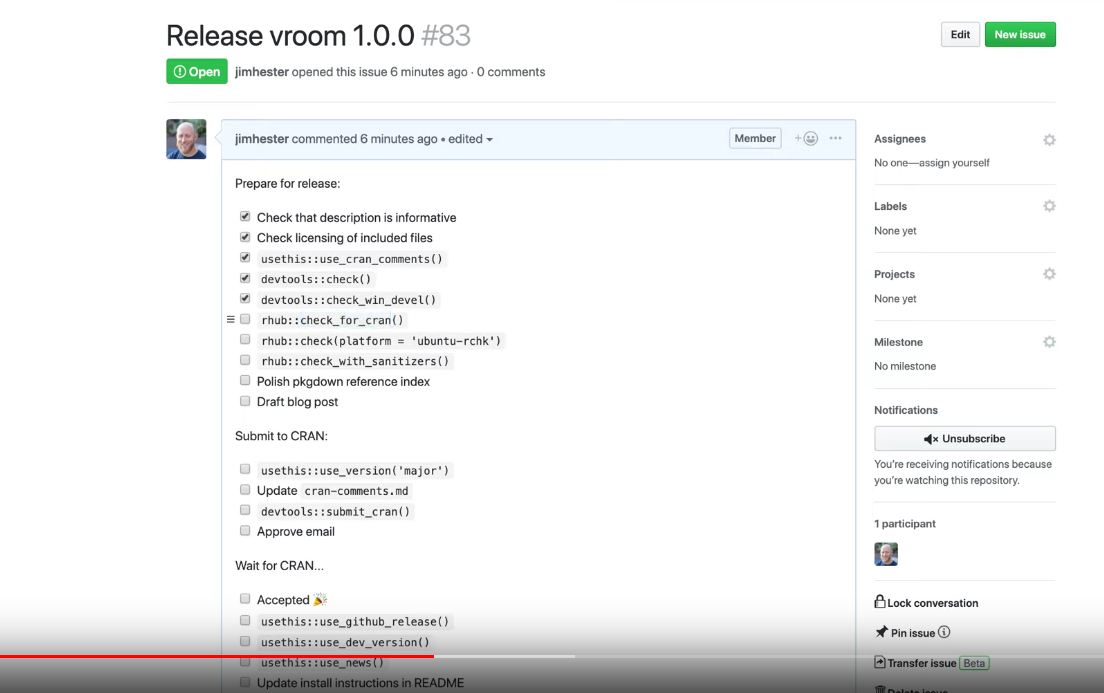 Using the different check_*() functions allow you to test installing/building your package across different operating systems and it’s very useful. They also send you an email so you can check the full build log at your convenience. 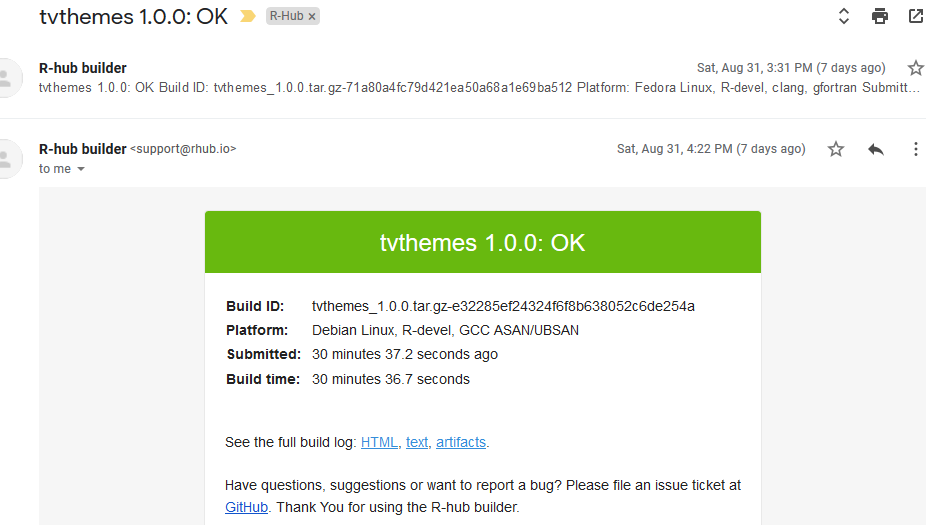 A problem I came up against initially was that I was using the {emo} and {patchwork} packages in the example plots for the README and as you might know, having packages via “remotes”/GitHub aren’t allowed as dependencies for CRAN packages. So the workaround I had to do was keep the code but not evaluate it (eval=FALSE in the RMD chunk) and add imgur links for the plots so I could delete the packages from the “Suggests” section in the DESCRIPTION.

Some other silly CRAN mistakes that I made:

The ‘fully specified URL’ thing took me a while to figure out as I included a lot of links throughout the README and it was hard to find where a / was needed!

I screwed up and had to resubmit quite a number of times but I think it’s important to document failures and the bumps along the road as well. Also, I did add a few more tests but as you can see from the codecov badge there wasn’t much added in terms of breadth but more in terms of depth!

In terms of function names you’ve all seen by now that they follow the camelCase style after the initial theme_ and scale_*_. However I realized that not all the functions follow this styling which is … rather embarrassing on my part. The prime culprits are all the import_font_*() functions although I make the excuse that they started off as imports of {hrbrthemes}’s font functions and grew out from there. However, one egregious mishap happened with theme_parksAndRec_light() which really should be theme_parksAndRecLight() instead. As a solution, the former is now deprecated (via a .Deprecated() call) in favor of the latter; the original _light() version will be deleted in the next major release, v2.0.0.

This mistake had me really thinking hard about the naming conventions used throughout the package and I will have to make some hard decisions concerning whether to keep certain names or even do away with camelCase for the next major release. For example, I have been thinking about changing theme_theLastAirbender() to theme_avatar() or something a lot shorter and memorable. My original intention was to use ‘Avatar’ more prominently in the names but well… for most people that evokes the 3D blue aliens from a certain James Cameron film… One thing I am more sure about is changing scale_*_avatarTLA() to scale_*_lastAirbender() as the current one just seems wonky to type. Ultimately the solution might just be to rename both to use _lastAirbender() instead!

Don’t worry though as these changes (if any) won’t be fully implemented until the next big version change and I will make sure to deprecate the old functions in the minor releases leading up to v2.0.0! If you feel strongly about any of the above, have any suggestions for new TV shows, or find any bugs then please let me know on GitHub or on Twitter. I hope you enjoy the new CRAN version of {tvthemes}!