In the past week or so, XKCD graphs of “The most comfortable place to live in ___” have been popping up on the #rstats community on Twitter. Jumping onto this trend (though slightly late), I will do one for Japan, the country where I was born! Some great examples that I’ve seen so far include Maëlle Salmon’s blog post for cities in the USA (which started this trend), as well as ones for Spain, Germany, Netherlands, and even for all of Europe! The original XKCD comic can be seen here.

Using Maëlle Salmon’s riem package we can look up weather data from all over the world collected at airport weather stations. We can see that there are 136 different stations (and airports) in Japan’s network! From the ID we can also see that the airports are coded in the ICAO standard rather than the IATA standard, this will come into play later!

For which exact cities to choose, I took a note from Maëlle’s article where she searched for the cities with the busiest airports. This makes sense as the weather data we will gather and the airport data will then have a similar column (the ICAO code) on which we can join on!

My source was from the Ministry of Land, Infrastructure, Transport and Tourism (MLIT) statistics on Japan’s busiest airports (in terms of total passenger traffic), which has been copied onto everybody’s favorite “knowledge bank”, Wikipedia (link)! The most recent list is from 2015 and although I could look up more recent figures I don’t think two years would make such a big difference (… and I’m lazy).

I load up my favorite web scraping package, rvest and gather the list of airports! (For a step-by-step intro to web-scraping using R, check out my other blog post here!)

In the table, the airport codes in both IATA and ICAO format are in a single column separated by a slash. We can use the separate() function from the tidyr package to separate the airport code column into the respective IATA and ICAO codes. The regex for a literal slash is "\\/", remember that you need to escape twice!

Then, let’s save our handy dataset so we do not have to re-run web scraping every time!

So, if we start a new session we can use read.csv() to load our data set without have to go through the web scraping code!

For the weather data I considered quite a few sources before just settling with the riem package for convenience.

Just putting this out there for anybody who wants to look at Japan’s meteorological data in the future!

Now to grab the weather data from the weather stations using the riem package, we use code from Maëlle Salmon’s original post where we use map_df() to basically to apply riem_measures() on each airport code (as a vector input) with the output being a nice data frame! I’ve been slowly trying to incorporate more purrr into my data analysis tool set, so it’s great that I get another chance to see it in action here!

The result is two gigantic datasets of around 105,000 observations each along with 25 variables ranging from dew point temperature, wind speed in knots, relative humidity, and many more!

Recalculate the temperatures into Celcius using the convert_temperature() function in the weathermetrics package!

We can then calculate the Humidex with the calcHumx() function from the comf package!

The interpretation of the humidex is as follows:

Join summer and winter together using the left_join() operation! Then, join with the jp_airport_codes data set to add in city names to airport code data set, combine them by the airport ICAO code.

Looking at what we have… we can remove Narita Airport’s data as not it’s not really Tokyo, it’s located far out in Chiba, and besides the airport there’s nothing of interest (to tourists at least) out there anyways! Haneda Airport’s data is more representative of Tokyo’s weather, although it is stuck out in Tokyo Bay.

Also we need to remove Kansai International Airport, as it is around 20 miles away from all the attractions in Osaka. Fun fact: Kansai Int’l was built to relieve congestion in Osaka Airport (also included in this data set) and only handles international flights!

For some odd reason Ibaraki Airport is listed as Tokyo, when it is anything but! Also, we should shorten Kochi’s label, the plot is going to be cluttered enough as it is!

Iwakuni appears twice for some reason… very odd, but we can remove it by using the unique() function which filters out any duplicate rows.

Well, before actually plotting, we have to install the xkcd font and package. You can read about how to install it here. 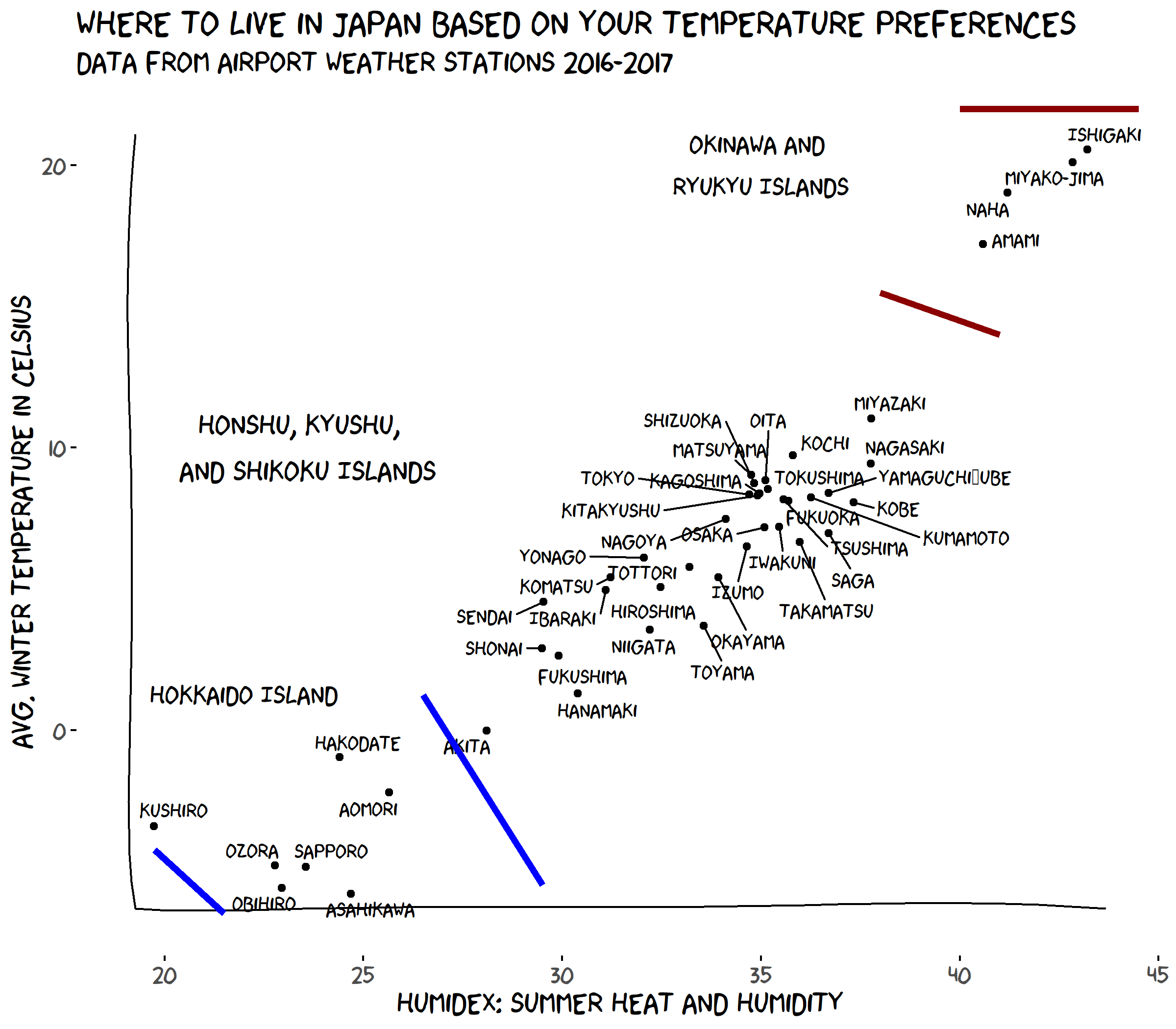 The graph looks like a map of Japan… with cities in Hokkaido on the bottom left instead of the top right, vice-versa for Okinawa! Let’s try plotting our data onto an actual map of Japan to get a different perspective.

Weather data on the map of Japan

First we need to acquire the longitude and latitude data for Japan with the map_data() function in ggplot2. We also need to add in the coordinate data into our climate_japan dataset.

To be able to view the map better, we can cut out the Okinawa and Ryukyu Islands to create space by filtering out latitudes below 30°. We will create a separate map for those islands too. 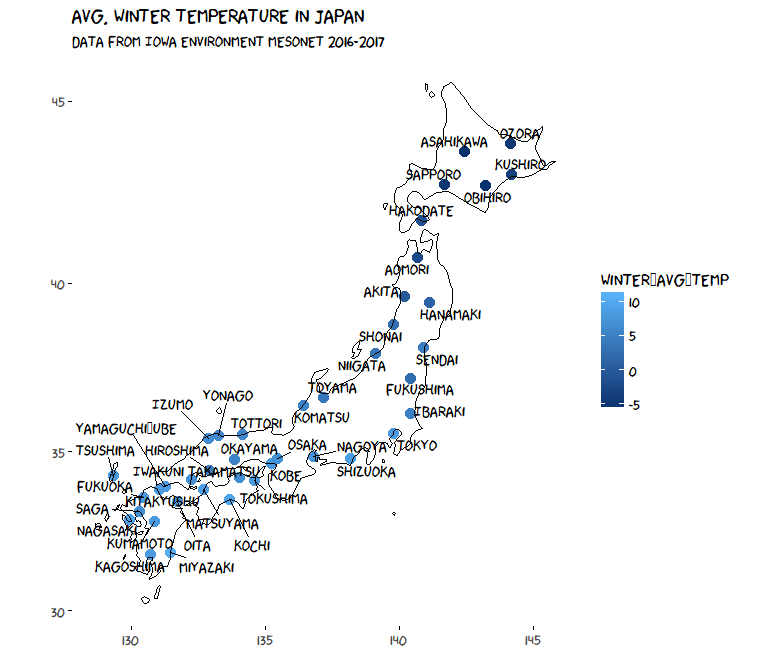 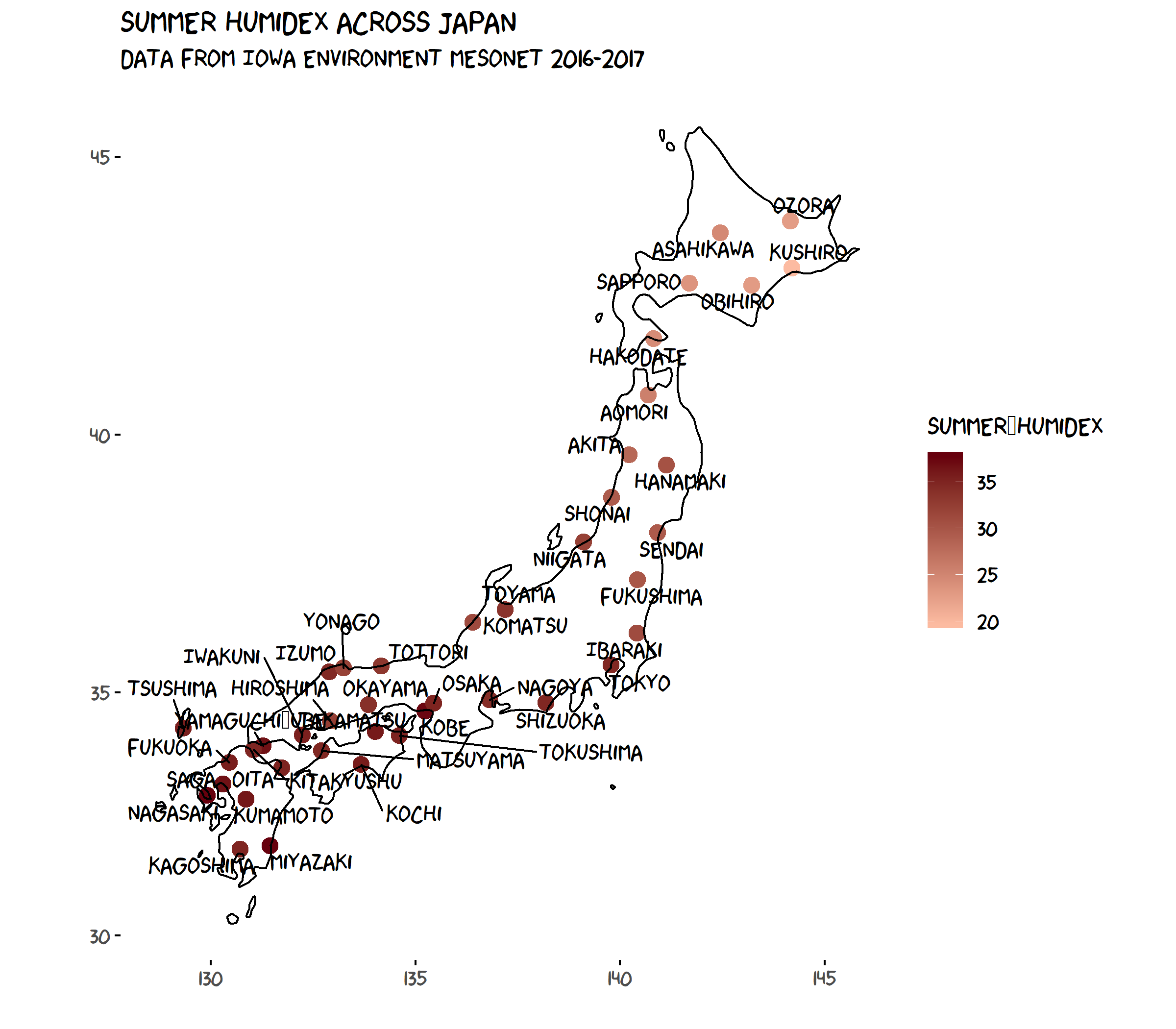 A large area in the middle of Honshu Island that does not have any data is the Central Highland region, which is a very mountainous region and therefore there aren’t any airport weather stations located there for our plot. This is a great area to go if you love to ski and relax in an onsen! In Nagano Prefecture you can go to Jigokudani Monkey Park where you can see snow monkeys relaxing in the onsen!

Now for the Okinawa and Ryukyu Islands:

As we can see from all the maps, the differences are pretty obvious. The segmentations we saw in the Humidex/Avg. Winter Temperature graph can be clearly seen with the map. With Japan being such a narrow chain of islands going from as far north as Hokkaido to the warm beaches of Okinawa there aren’t many surprises in the data. As Japan is known for it’s very distinct four seasons, maybe I’ll incorporate spring and autumn data for different blog post…! It can be very humid in Japan during the summer time, it feels like you are melting constantly and I much prefer the spring months of Japan, the beginning of which is heralded by the blooming of the sakura/cherry blossoms!

Sidenote: If you want to take a look at some data viz stuff I did with sakura blooming time data, check it out here!

My next steps in this analysis would be to try to recreate a Köppen climate classification map of Japan using ggplot2 (learning how to use shape files and adding in layers on maps!) and also to try using leaflet to create a map of Japan with the winter temperature and humidex data that we gathered with the added bonus of tourist information in each of the city markers!

A screenshot of my leaflet sample: 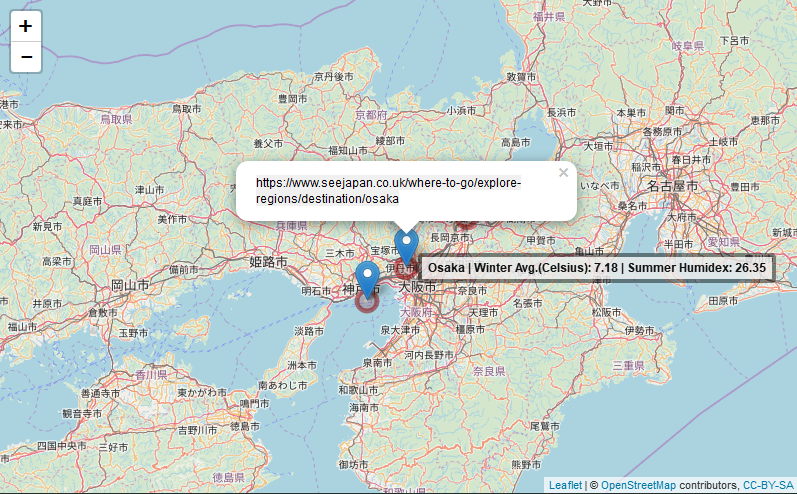