{ggshakeR} 0.1.2, a package for soccer analytics visualizations for R, is released! Users will most likely not see anything changed from their perspective as this version was all about implementing Github Actions CI tools and making changes in the back-end of things for the package. For more on the visualizations possible with {ggshakeR}, please take a look at the package website!

Now let’s go a bit into detail about what these tools do and how they help maintain a R package.

The various Github Actions flows for R packages can be seen in the Actions repository and can be inserted into your package through various {usethis}) package commands that I’ll go over in this blogpost. A few of these also add badges to the README so people will be able to tell at a glance the status of your package.

The previous version of {ggshakeR} was my first contribution to the package, where I built out the {pkgdown} website to house all of the documentation and vignettes. Now using Github Actions, it will automatically build and deploy the website for us on every push.

Similarly to how we’d use devtools::check(), now with Github Actions every time we push or PR on Github the package will be built and run all the tests. Using the {usethis} package it is very easy to implement this workflow into your package:

This creates a new R-CMD-check.yaml file in your .github folder, using the ‘standard’ version has the workflow check on the Linux, Mac, and Windows platforms for both the latest version of R and R-devel. 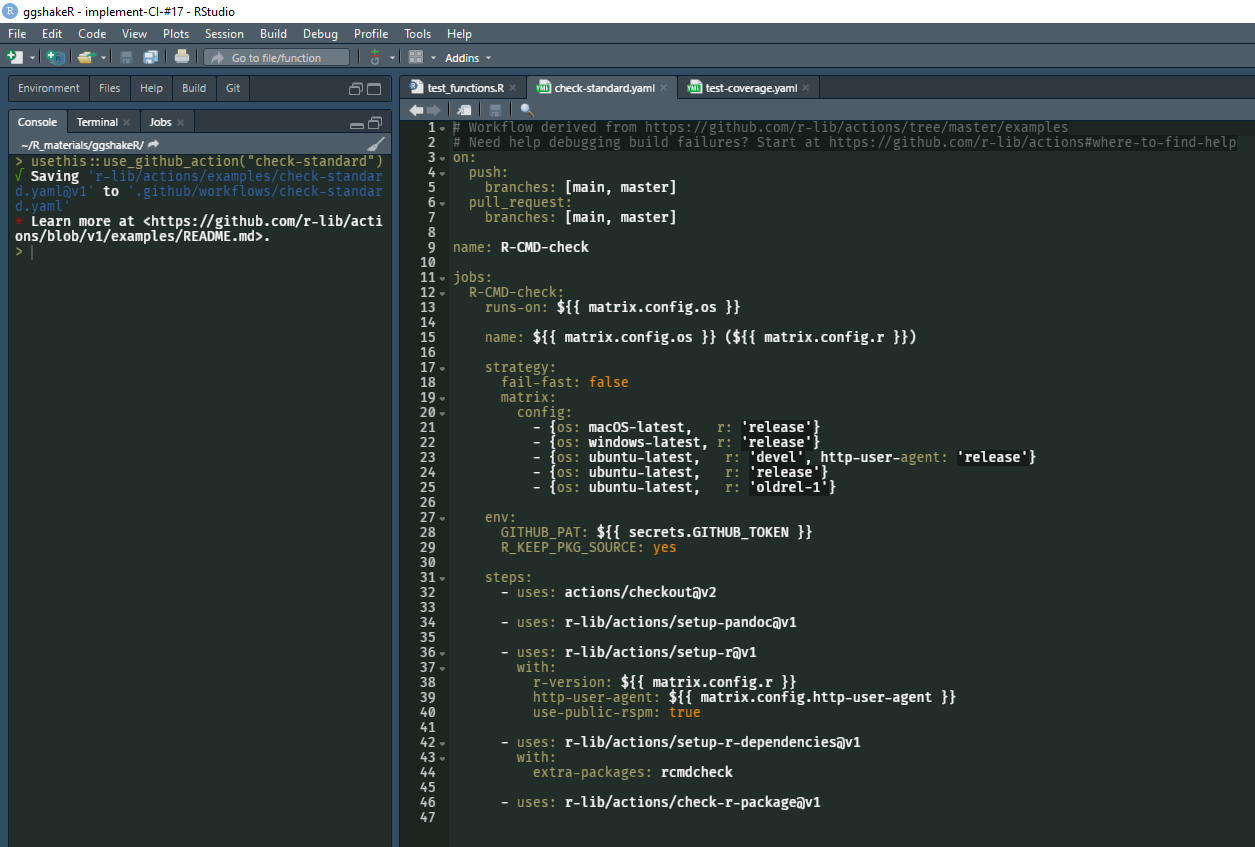 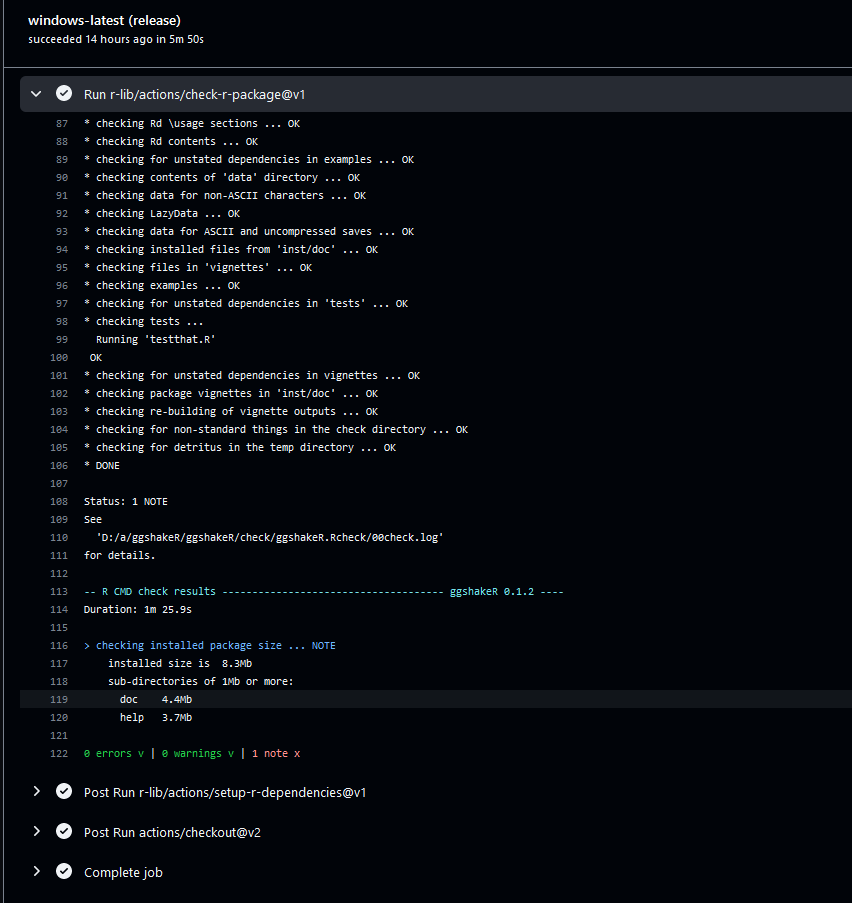 Knowing how much code your tests cover in your package is very important. Using codecov via the covr package allows you to create reports that describes the breadth of your test coverage.

Once you have codecov connected, you can see the badge on the README and click through it to see the report for the latest commit.

A lot more work still needs to be made in regards to testing but its also worth noting that most of the basic functions are covered, its just that these functions have a lot of different options that haven’t been covered yet (like tests for different background/theme colors). An easy way to generate a testing matrix for multiple configurations of function arguments will be the topic of the next release and ‘developer diary’. 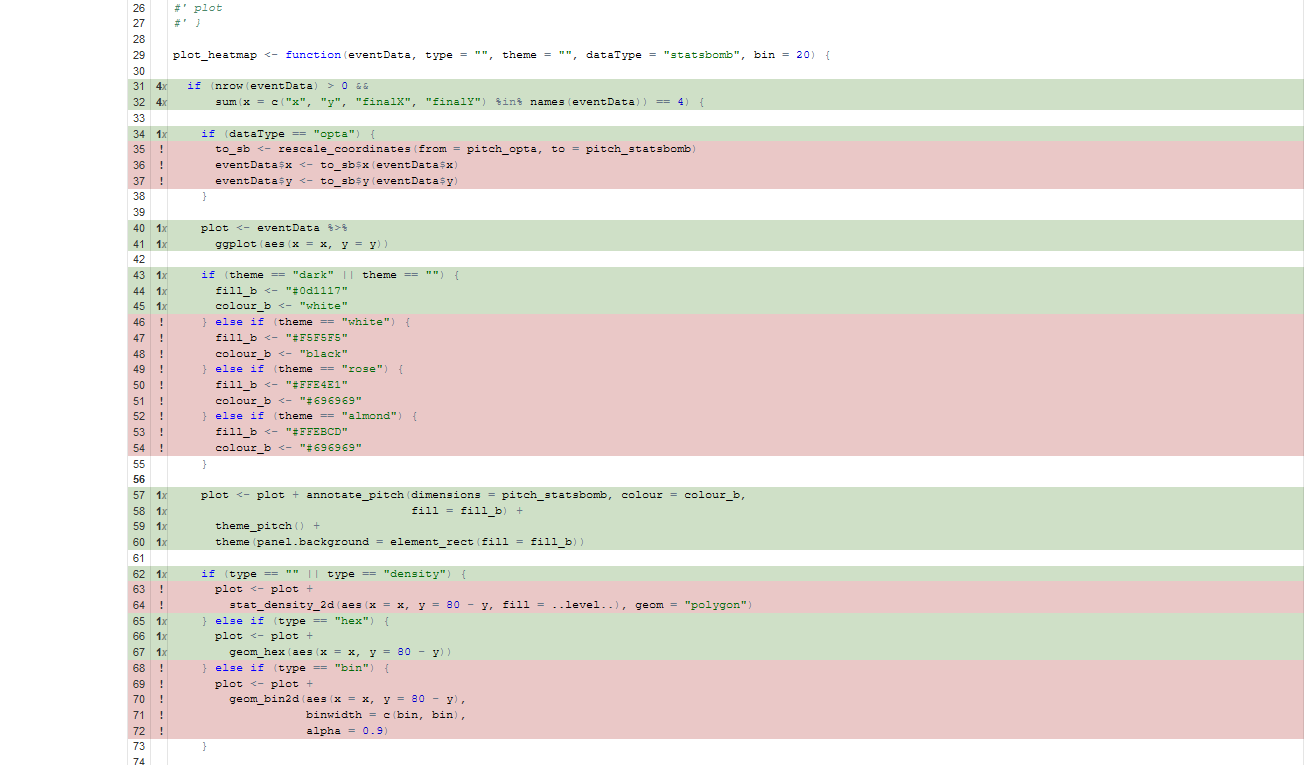 lintr is a package that lets you analyze your code base and check for various stylistic issues in your code, mainly based on the tidyverse style guide.

I took a cool lintr Actions workflow from the {lintr} package itself that only lints files that were changed in the Pull Request. 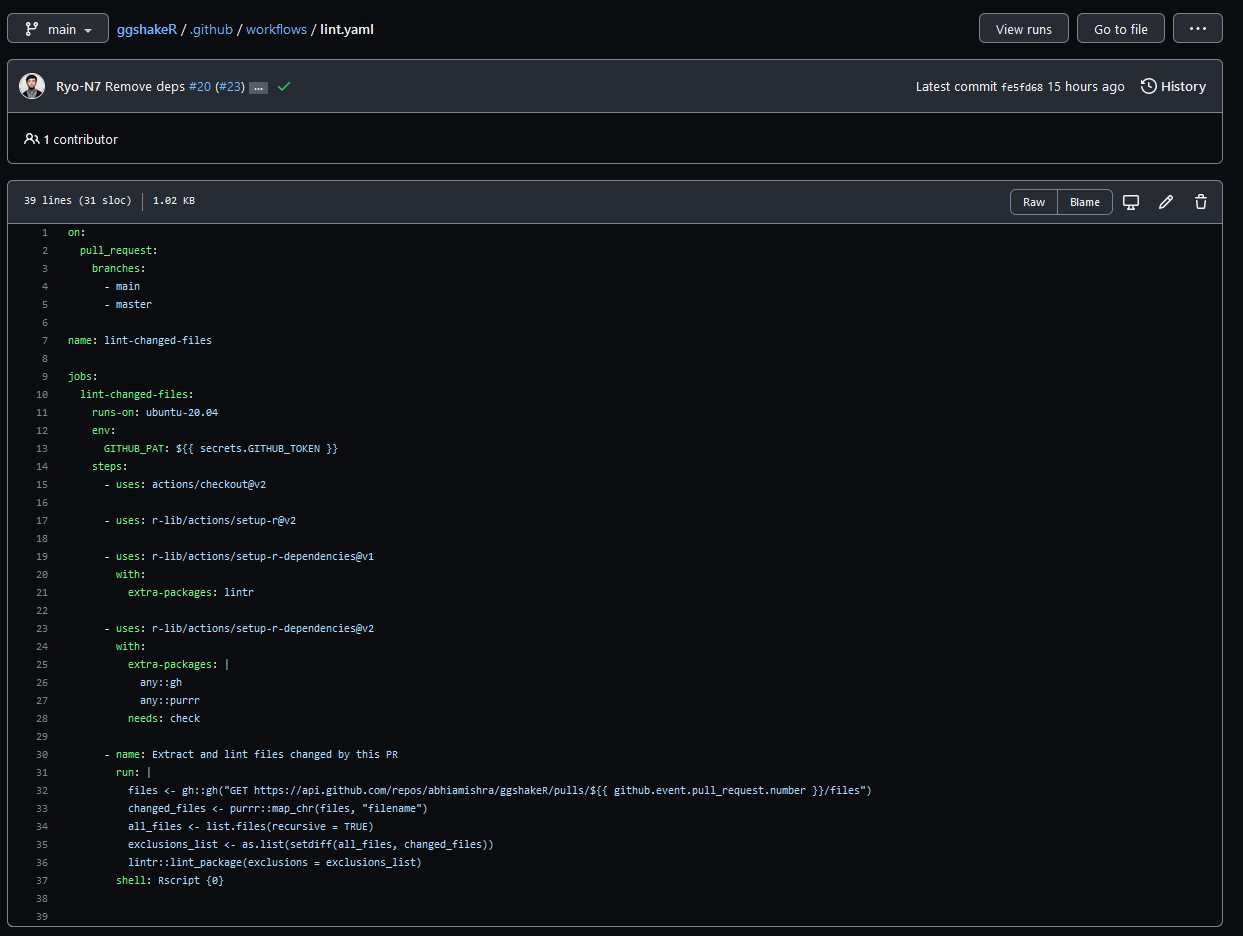 Not all linters are important or need to be turned on so I configured the .lintr file to exclude a certain number of superfluous checks. Most of the issues that remained were either cosmetic or for readability of the code, such as spaces after commas, using <- instead of = for assignment, trailing whitespace, etc. The most pressing issue that was flagged that would impact users was the inconsistency in the function arguments between camelCase and snake_case, sometimes within the same function.

These are all issues that will be tackled in a future issue after some discussion between the {ggshakeR} authors. For the purposes of this release, I mainly focused on identifying issues and fixing stuff that wouldn’t directly impact users by changing argument names and function behavior.

While lintr allows you to identify issues, how would one go about changing them? While you could click through the lintr report manually, you can also use the {styler} package to do this automatically for you. Of course, you have to be very careful about using this as it will change your code. For this package, I only ran styler::style_file() on the testing file as an example. 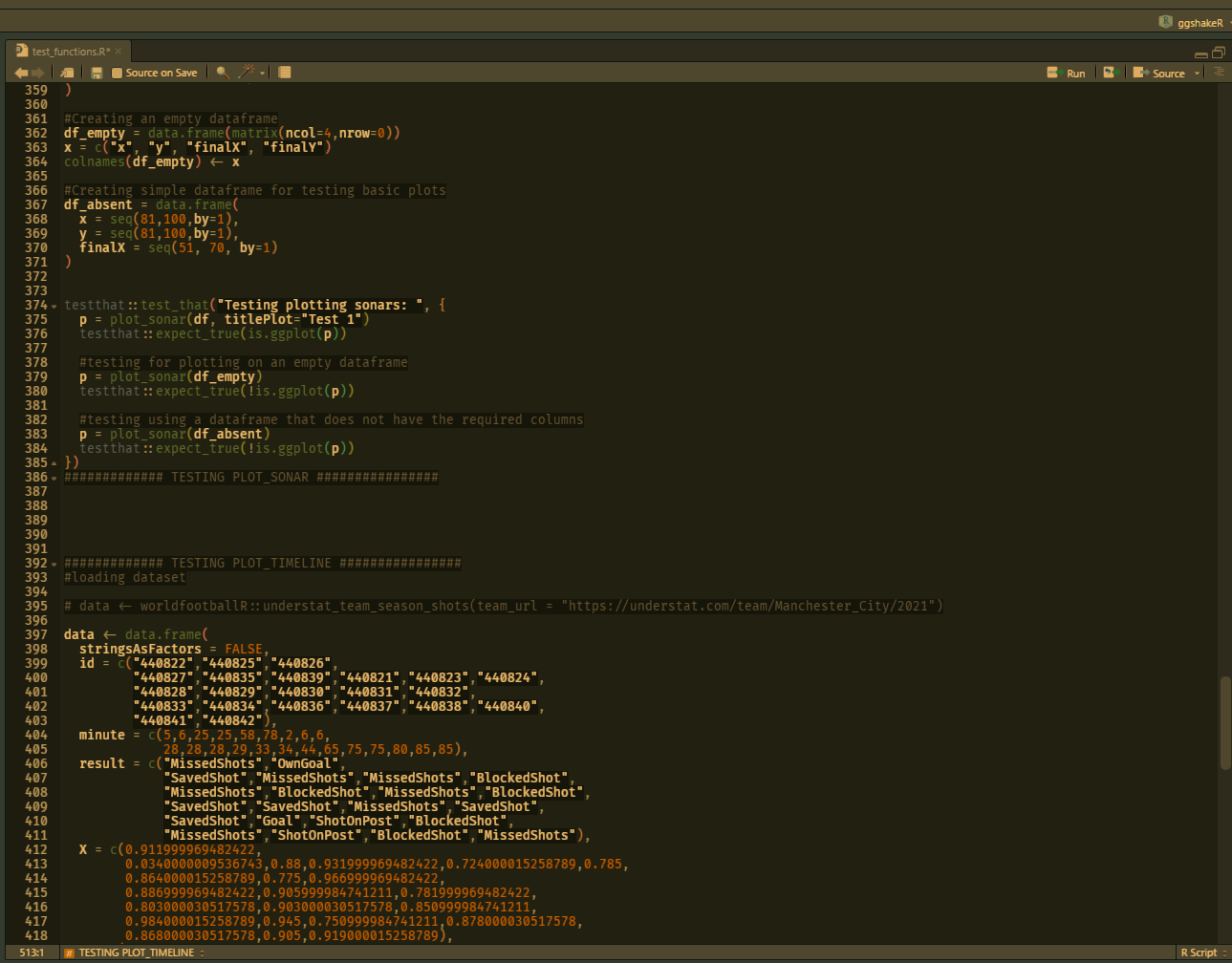 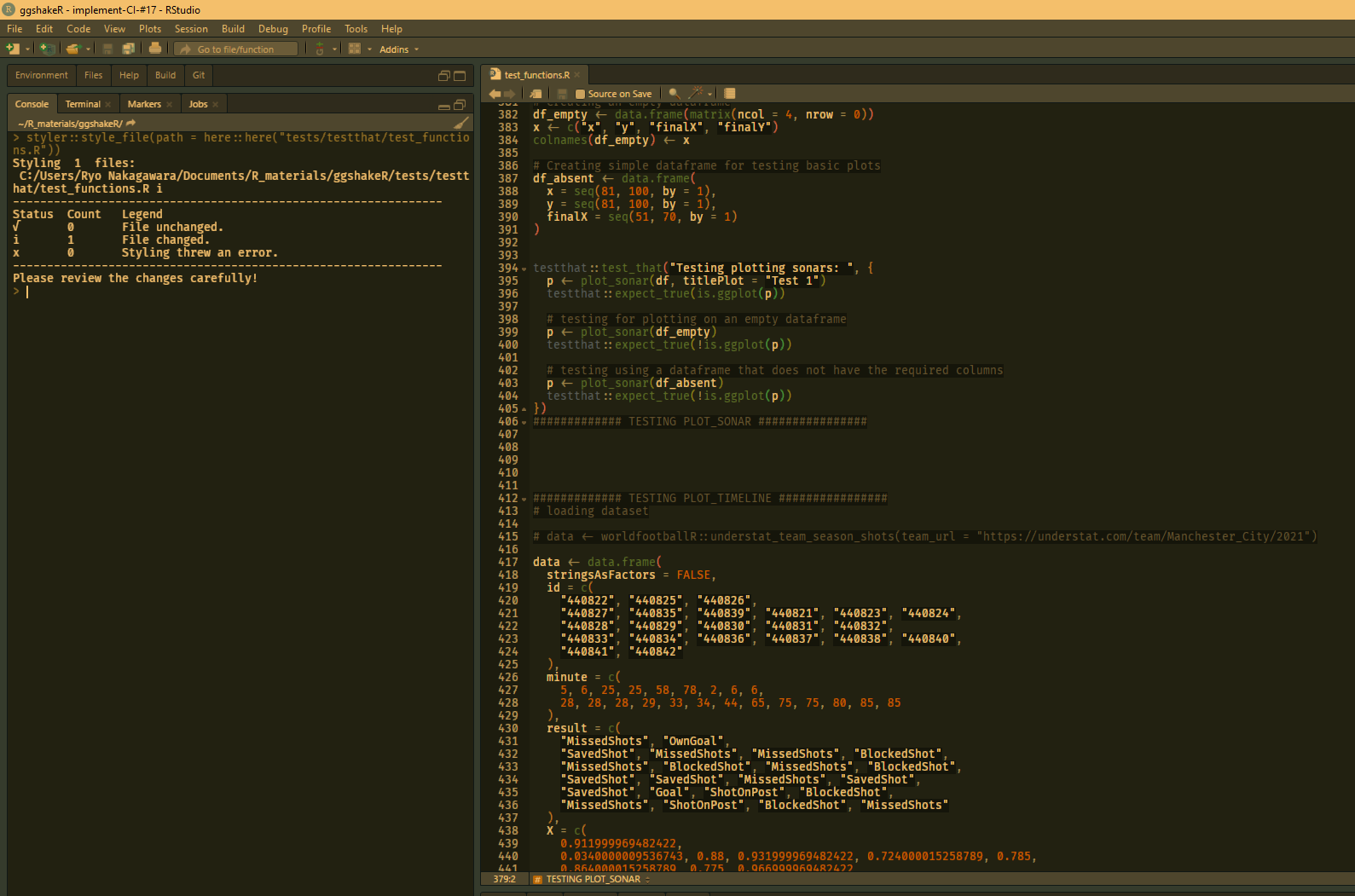 By letting it run on Github Actions, we can check before we merge Pull Requests that our changes comply with standard coding style conventions by clicking on the individual commits themselves after the Actions have completed in the Pull Request window. 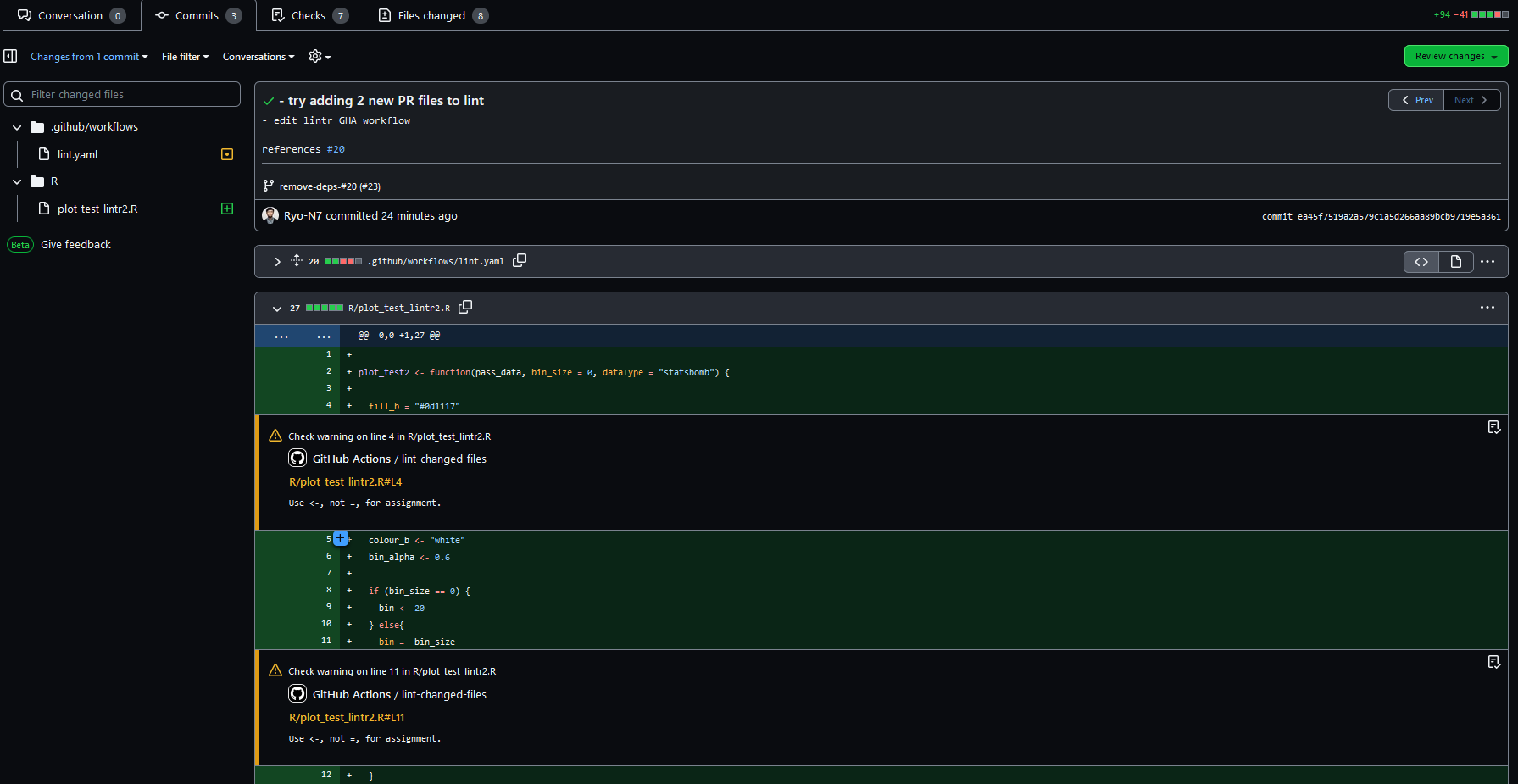 Prior to this version, {ggshakeR} had 19 dependencies. One of the goals of this patch was try to find ways to reduce this number. Thankfully, the functions from certain packages could easily be replaced with base R code or could be replaced with a function in a different dependency (Ex. going from {stringr} to {stringi}).

For the big 0.2.0 release there will be further steps to take out a few more. The nature of this wide-ranging visualization package makes it necessary to import different packages (no need to re-invent the wheel) but where able, I’ve been working with the other authors to reduce them where possible.

All together, this is what a successful Pull Request looks like when it passes all of the checks run by Github Actions. 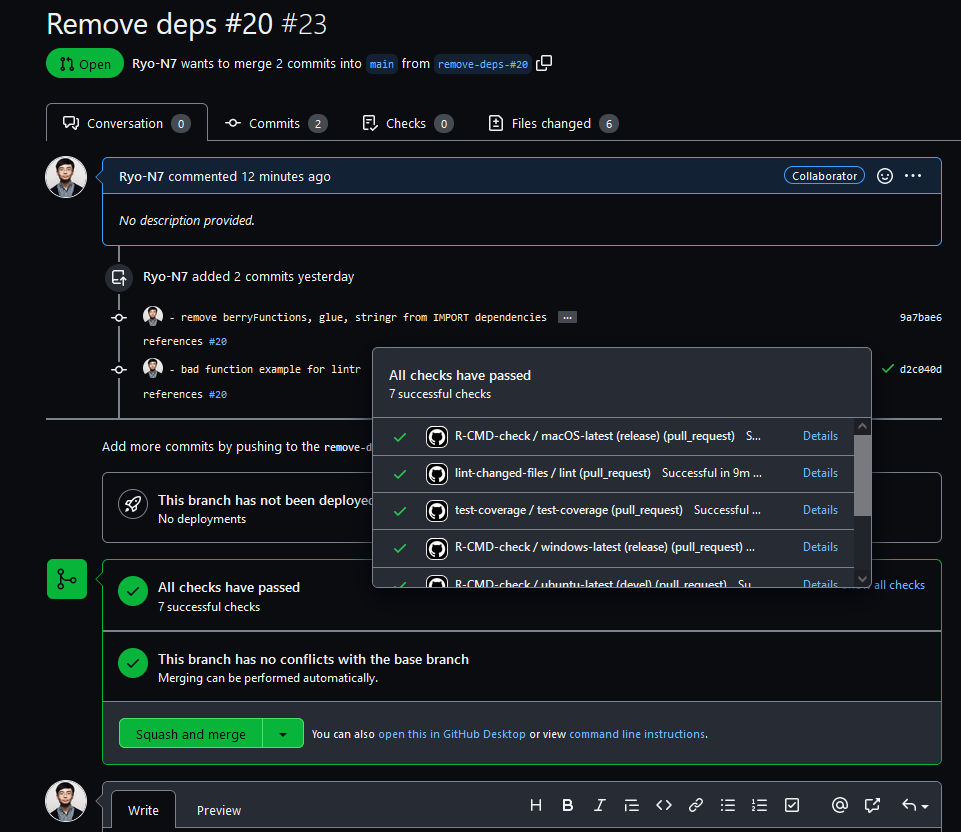 This blog post was more of a ‘developer diary’ rather than a tutorial for new features. There is still lots of work to be done, mainly testing to increase coverage and also some much needed discussions on code consistency between the different authors and potential contributors to the package.

Big thanks to the other {ggshakeR} authors, Abhishek and Harsh, and to all the users for your support. There is much more to come, especially in terms of actual viz content in version 0.2.0… and eventually to a CRAN release!